Andreas Johnsen got access to Ai Weiwei when the Chinese artist was freed on parole in 2011.

After 82 days of solitary detention Chinese artist Ai Weiwei is put under house arrest. He suffers from sleeping disorder and memory loss − 18 cameras are monitoring his studio and home, police agents follow his every move, and heavy restrictions from the Kafkaesque Chinese authorities weigh him down. On top of all this, he is met with a gigantic lawsuit from the Chinese government, soon to be named “The Fake Case”. During his year on probation, Ai Weiwei is shaken but still finds new ways to provoke and challenge the powers of the Chinese authorities.

Self-taught director Andreas Johnsen spent over three years shaping the documentary with regular trips to Beijing to visit Ai Weiwei in his home, studio, production space and office. The final product concentrates on the year starting in summer 2011.

“‘Everybody always wants to make films about me, Ai Weiwei said. ‘It would take too much of my time and I’m busy.’ But that didn’t faze me and I started e-mailing him to explain that it isn’t my style to steal people’s time. I just tag along and hardly ask any questions.”

“Each time I visited him in Beijing, he was under enormous pressure. All that stress gets to you. It was an intense few weeks each time.”

“It’s sometimes hard to understand why Weiwei is considered such a dangerous adversary. He is just asking the Communist Party to respect the law and people’s basic right to freedom.”

Andreas Johnsen is the one-man army who got access to Ai Weiwei. Even as the world-famous Chinese artist and dissident had been banned from talking to the media, the Danish documentarian had an inside view of his constant battle with the authorities. The resulting film, Ai Weiwei The Fake Case, is intimate and thought-provoking and packed with action.

Ai Weiwei The Fake Case has no dearth of dramatic events. But amongst the myriad car chases, state-sanctioned harassment, a literal rain of money and an exhausted artist who nods off anywhere and anytime at the drop of a hat, one scene sticks out as particularly absurd. Well at least according to Andreas Johnsen, the brains, cameraman and director behind this action-jammed, intimately shot documentary.

Johnsen is on hand to capture the situation when the China correspondent of British ITV with increasing desperation tries to wrangle an interview out of Ai Weiwei. The incident occurs when the now 57-year-old artist is released on parole after 82 days of detention on charges of violating tax laws with his company Beijing Fake Cultural Development Ltd. But the authorities – that is, the Communist Party – have put a gag order on the bearish art-world phenomenon and so he legally cannot answer questions from the media. “You can film me while I’m taking a shower,” he proposes. Somewhat surprisingly, the ITV correspondent declines the potential scoop. “It’s a family show, Weiwei,” he says. “It’s evening time, children are watching.”

The debacle wraps with the reporter putting in a request for a solo interview once the gag order is lifted, saying, “It would be very good for me … because it’s you.”

Johnsen all too well remembers the mixed feelings he had documenting the awkward scene.

“The reporter made me cringe so bad, but of course it was hard not to laugh, too, because Weiwei is really taking the piss. He was basically offering ITV an artwork, a performance, and the reporter was dumb enough to decline. He wanted to interview Weiwei about censorship, but he was censoring what Weiwei had to offer. The whole scene was so meta and absurd.”

There were two soldiers in Weiwei’s cell round the clock. They changed every six hours and marched back and forth while he was sleeping.Andreas Johnsen

The self-taught Danish filmmaker has been making documentaries since 2003. In his homeland he is seen as a bit of a lone wolf who travels to some of the least secure regions in the world and, without a hint of staging, gets close to increasingly big events in increasingly big hotspots. In Ai Weiwei The Fake Case, Johnsen got unprecedented access to Ai Weiwei, who, while the film was being made, was named the world’s most powerful artist by Art Review Magazine.

The documentary took shape over three years, as Johnsen made regular trips to Beijing to visit Ai Weiwei in his home, studio, production space and office. The final product, however, concentrates on the nerve-wracking year starting in summer 2011 when the artist was freed on parole, charged with evading millions of dollars in taxes. The case reeks and is fraught with political undertones. As it quickly turns out, Ai Weiwei is systematically being watched and followed. Anxiety takes root in the temperamental artist who suffers from insomnia and nightmares, when he finally does sleep – an indelible memory of his detention, or “kidnapping,” as he calls the nearly three months when not even his lawyers or family could reach him and he was never told why he was being held.

“There were two soldiers in Weiwei’s cell round the clock. They changed every six hours and marched back and forth while he was sleeping. It was psychological terror,” Johnsen says.

In 2009, with bit of creative thinking and some helpful contacts, the filmmaker got hold of Ai Weiwei’s Chinese mobile phone number, determined to do a documentary about the artist.

“He wasn’t particularly interested. ‘Everybody always wants to make films about me,’ he said. ‘It would take too much of my time and I’m busy.’ But that didn’t faze me and I started e-mailing him to explain that it isn’t my style to steal people’s time. I just tag along and hardly ask any questions.”

In spring 2010, Andreas Johnsen – who has ten documentaries to his name, counting Ai Weiwei The Fake Case – ramped up his efforts to win over the famous artist and dissident. Denmark is a small place where everybody knows everybody in the art world, and the dogged filmmaker in the trademark flat cap got Ai Weiwei’s Danish dealer to act as his courier.

“He delivered a package in Beijing containing a hand-written letter and my films on DVD. Weiwei put on Murder (about Nicaragua’s zero-tolerance abortion laws, ed.) and watched the opening sequence where I kind of make an ass out of this politician who gets really offended. Weiwei liked that and told his personal assistant to call me up and give me the go-ahead. A couple of months later I visited for the first time, and after dinner the first night he gave me permission to start filming.”

In his new documentary, Johnsen is not only focusing on Ai Weiwei’s situation, he is also seizing a unique opportunity to gauge what direction China is moving in right now. 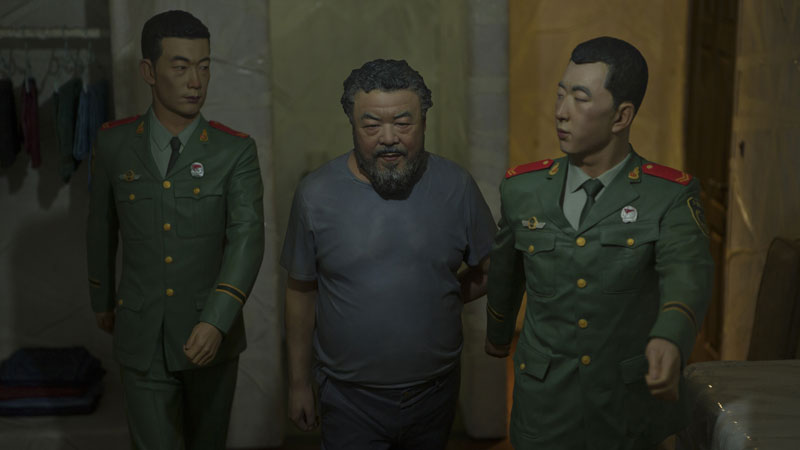 “The film is also about the development of the Chinese society over the last decade. I had been thinking about how to go about that for a long time. It would be boring to just show some activist in front of his computer trying to disseminate material over the Internet. But an artist making monstrous art and communicating with the world in all kinds of different ways – that has some good visuals,” the filmmaker says.

You tracked Ai Weiwei and his large staff in seven stages over three years. Did that change your view of the Chinese people?

“It’s generally hard to get included in social situations when you show up with a camera. Even more so in China. But over time, I became part of Weiwei’s entourage. I went out with him often to eat and I was never told that I wasn’t welcome. But I had to fight to get there. To be accepted.”

How did Ai Weiwei test you?

“It was a lot like, if I wanted to make this film, I just had to keep up on my own. It was up to me to keep pace. If not, too bad. When you don’t speak Chinese and Weiwei, to boot, is a man of very few words, it can get a little problematic. Just keeping track of where he was. When I finally managed to get him on the phone, he would mention the name of a restaurant in Chinese. And I had to take it from there. You have to prove yourself. He does that all the time with everyone around him.”

Even when Johnsen and Ai Weiwei, with no small drama, track down two of the agents who are constantly spying on the artist, we never find out who is really giving the orders to keep him under surveillance. But the invisible enemy has to be high up in the Communist Party hierarchy.

“It’s sometimes hard to understand why Weiwei is considered such a dangerous adversary,” Johnsen says. “He has a big following, of course – also outside China. But he is just asking the Communist Party to respect the law and people’s basic right to freedom.”

Making the film, Johnsen was impressed by how Ai Weiwei, who remains under a travel ban and can’t leave China, keeps challenging the authorities.

It was a lot like, if I wanted to make this film, I just had to keep up on my own. It was up to me to keep pace. If not, too bad.Andreas Johnsen

How he keeps pushing the envelope time and again with one sly provocation after the other. Like the time the heavy-set artist, who is the son of two dissidents, installed webcams over his bed and his workstation and filmed himself 24-7, rendering the state’s surveillance superfluous.

“At his weekly meeting with the police, they asked him to abandon the project. He is outfoxing them. That’s pretty cool. He just can’t help himself. Clearly, the urge to rebel is in his genes.”

Compared to your past documentaries, how hard was this one to make?

“This was probably the hardest. Because of Weiwei’s gag order, it was illegal for me to film him and I had to be very careful not to be found out. Each time I visited him in Beijing, he was under enormous pressure. All that stress gets to you. It was an intense few weeks each time.”

What does Ai Weiwei think about your film?

“He is pleasantly surprised. He actually didn’t think I would make a good film, considering all the obstacles he put up for me. When he saw the first rough cut, he declared that he was so pleased he would do anything he could to help me in the final phase. So I asked him to pose for the poster in the nude. That made him a little nervous at first. But, he had promised to grant my wish.”

Will the documentary have consequences for Ai Weiwei? 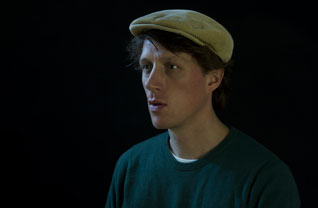 Director Andreas Johnsen, 39, is a self-taught filmmaker. Since 2003 he has directed, produced and financed his films from start to end. Johnson has made films on social issues in the world and how artists, especially in third world countries, manage to produce their art. Man Ooman (2008) is about dancehall dancing in Kingston, and A Kind of Paradise (2011) zooms in on contemporary artists from six African countries. In Kidd Life (2012), Johnsen follows Kidd, a young Danish rapper and YouTube phenomenon. Renowned for Murder (2009), the story of at-risk women suffering under Nicaragua’s strict ban on abortion. 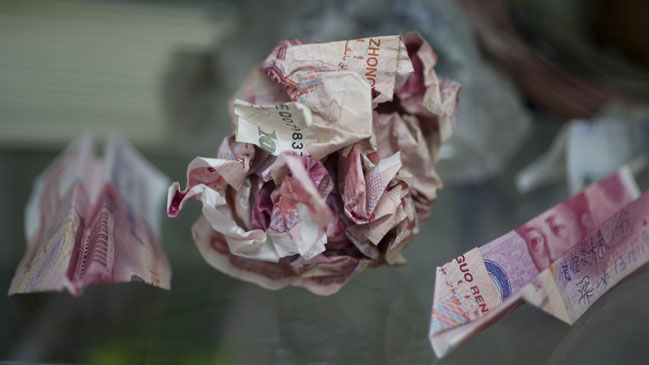 Ai Weiwei supporters sent a total of around 9m yuan (1.1m euros) to help the artist pay a bond enabling him to appeal the tax fine imposed on him by the authorities. Some notes were thrown over Ai Weiwei’s gate in the form of paper aeroplanes or wrapped around fruit. 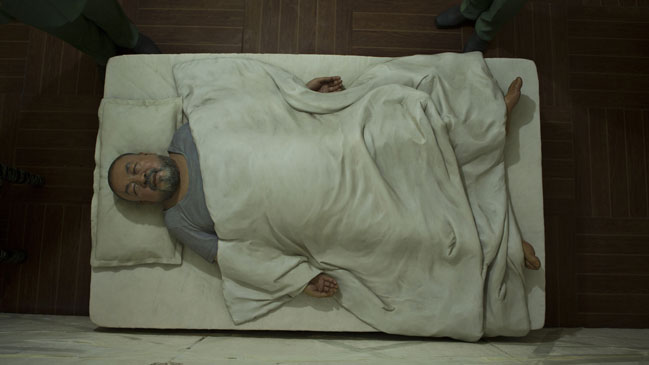 Andreas Johnsen follows Ai Weiwei as the artist is freed on parole after 82 days of detention when not even his family could reach him. Ai Weiwei created six dioramas with scenes from his imprisonment, one catching him sleeping in his cell.