FALL ISSUE 2015
Northwest
Berlin Market    FIPRESCI Award Göteborg
A constant sense of threat emanates from Michael Noer's film about two brothers who are forced to grow up as a gang war escalates.

Northwest takes its name from the rundown Copenhagen neighbourhood where Casper, 18, lives with his mother, younger brother and little sister. Casper sells stolen goods to local gang leader Jamal, but when he gets an offer to work for Jamal’s rival Bjørn, he jumps at the opportunity to advance himself, entering Bjørn’s world of drugs and prostitution. Soon, tensions between Bjørn and Jamal escalate, and as Casper’s brother Andy is drawn in as well, Casper finds himself and his family dead centre of a conflict that threatens to destroy them.

Stylistically, Northwest extends Michael Noer and Tobias Lindholm’s debut feature, R. Real-life rules determine the story’s development. Northwest doesn’t spell out its characters’ background or psyches – it shows us how they react in a given situation.

Clearly fascinated with a rough environment where the law of the jungle rules, Noer also paints a heartfelt portrait of two big kids who are really happiest at home with their mother and younger sister.

“I didn’t make Northwest by feeling my way along – it was made by yelling and punching. A lot of the kids we talked with in the neighbourhood have a restlessness that we tried to maintain. It’s pure chaos, pure gut, that you’re trying to capture with the camera, say if someone’s fighting about who owes who money. ‘Faster, faster! Say it faster! Okay, keep that energy, we’re rolling!’ Films are great for visceral art, the art of the observed, while books are an internal voice. I hope people will be entertained by Northwest, but I also hope they’ll get some new vitamins. It should be experienced with the gut – then the head can reflect afterwards.”

Pow! Right in the face

Having sent a poor young man into a tailspin among hardened criminals in his prison movie R, Michael Noer is back with a new film about youthful restlessness and manhood. Northwest is a film with no filling in or explaining. It’s “pure film, pure energy,” the director says.

Some use the down-to-earth term “movies.” The French favour the loftier “the seventh art.” Others call it the art of “illusion” or “magic.” Director Michael Noer has another moniker for film.

“Film is the art of the groin,” he says with a look like he just made a normal statement. “Film is POW! in your face. It’s physical.”

Michael Noer likes to communicate directly and to the point – when he is making his films or just talking.

“I remember two clips from film history class in film school. One is a train coming directly at the audience. The other is a cowboy with a pistol. Those are the basic elements of film. We haven’t come any further – and maybe we don’t have to.”

One might object that countless excellent and important films have been made without runaway trains or men with guns. But the point Noer is making is that cinema has the ability to communicate directly, potently and physically, instinctively, without explanation or reflection. 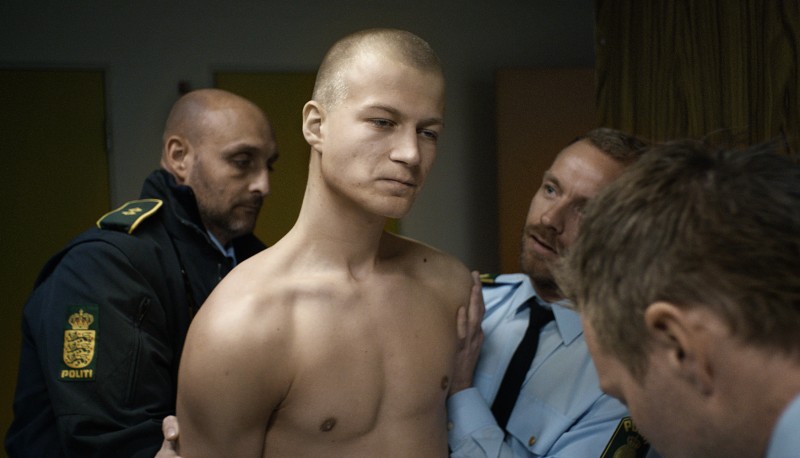 Interested in human fates
If this approach to the world of film doesn’t seem all that clear and logical, please see Noer’s two features. R, directed with Tobias Lindholm (A Hijacking), is a simple story about a young small-time criminal who is thrown in with hardened convicts and is very quickly swept up in a prison power struggle. It’s a blunt film, physical and direct, without much blood or violence but with a constant sense of threat. It’s a film that hits you in the gut.

The same goes for Noer’s new film. Northwest, named after one of Copenhagen’s most notorious neighbourhoods, is the story of two teenage brothers. Casper, the older brother, is cruising along in his career as a burglar when a more professional outfit approaches him for a big job. Accepting the offer, he quickly finds himself at odds with his former partners – and soon his younger brother is drawn in as well.

“I knew there was more to get out of the criminal environment after R,” Noer says. “I was interested in it as film, but I was also interested in the human fates. In my documentaries, I told stories of young people – a neighbour who was having an abortion, a group of friends riding their mopeds bare-assed. I like those kinds of coming-of-age stories. When my co-writer, Rasmus Heisterberg, and I did the research for Northwest, we realised that it always takes the smallest cogwheel to get the biggest machine running. The youngest people are always left with the headache. We thought that was interesting. Also, the word ‘brotherhood’ popped up a lot. Crime is a bond among men: Who can keep his mouth shut? Who can be trusted? Who would tell on the others?”

This is where the train and the man with the gun come in. A kid, with no support from the authorities or his single mother, owing money and favours to two different groups of criminals is a bomb waiting to go off. It’s pure film. Pure physicality. You don’t have to explain anything.

“The main theme of Northwest is ‘When am I man enough,’” Noer says. “What’s a man? What’s manhood? In my DVD collection I have films like Michael Mann’s Heat that I watch over and over again – films that explore men and manhood. There’s an inherent conflict there that also affects me. When you ask yourself, ‘When am I man enough?’ you’re thinking about tattoos and muscles and money and cars. Meanwhile, I’m hoping Northwest will have a big life. When is my film enough? When am I filmmaker enough? The whole thing about proving something to the world is a theme I can relate to. Casper gets caught up in that spiral and he drags everyone else into it, too, because his little brother has to prove that he’s man enough, too.” 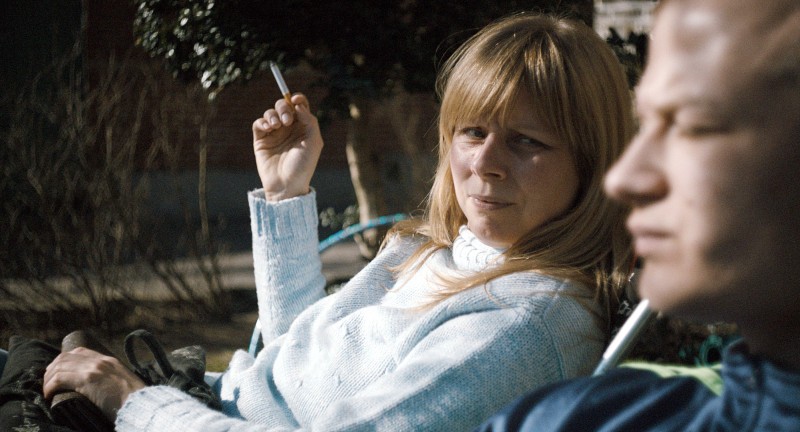 Film as visceral art
Looking at Noer, a short, content family man who recently had his first child and whose worldview is essentially sensible and rational, it seems obvious to assume he has a profound fascination with people who stare into abysses he would never dare go near himself.

“That question answers itself,” he says. “But it’s also about doing things that get out of control, that get a little dangerous. I like a little trouble on the shoot. It keeps you on your toes. It keeps you focused on what’s going on in front of the camera instead of what’s in the script.

“I didn’t make Northwest by feeling my way along – it was made by yelling and punching. A lot of the kids we talked with in the neighbourhood have a restlessness that we tried to maintain. It’s pure chaos, pure gut, that you’re trying to capture with the camera, say if someone’s fighting about who owes who money. ‘Faster, faster! Say it faster! Okay, keep that energy, we’re rolling!’ Films are great for visceral art, the art of the observed, while books are an internal voice. I hope people will be entertained by Northwest, but I also hope they’ll get some new vitamins. It should be experienced with the gut – then the head can reflect afterwards”.

Northwest enjoyed its world premiere in Rotterdam and won the FIPRESCI award in Göteborg. The film is produced by René Ezra and Tomas Radoor for Nordisk Film.

Northwest is Michael Noer’s second feature. The film enjoyed its world premiere in Rotterdam and won the FIPRESCI award in Göteborg.

Noer made his feature film debut with R (with Tobias Lindholm, 2010), winning top awards in Göteborg and Mumbai.

Noer’s documentaries include Vesterbro (2007), a story about a young couple living next door, and The Wild Hearts (2008) following a group of young men embarking on a journey through Europe on their mopeds.

Noer, 34, graduated from the National Film School of Denmark in 2003.

The drama of stepping up and taking responsibility clearly fascinates Michael Noer, director of Northwest.

It’s generally wise not to look for themes in a filmmaker’s résumé. It has a nasty tendency to make the stories less rich. But one probably wouldn’t ruin anything by saying that Michael Noer likes stories about young people who step up and grow up. Nearly all his films are about these little fledglings perched on a branch high up in a tree preparing to plunge into life. Will they spread their wings and fly? Or will they break their necks?

In his 2007 documentary, Vesterbro, Noer filmed his neighbours, a young couple, as their relationship took them into adulthood. Another documentary, The Wild Hearts (2008), tracks a group of cheeky lads making a Grand Tour of Europe on their mopeds.

His first feature, R (directed with Tobias Lindholm, 2010), is about a young criminal caught in a power struggle among hardened prison inmates. Now, in Northwest, two teenage brothers are forced to grow up as a gang war escalates around them in Nordvest, a notoriously rundown, multiethnic working-class neighbourhood of Copenhagen.

While Noer’s films have plenty of other interesting angles and themes, including manhood, jackass-type rituals, raw power and sensitivity, the drama of stepping up and taking responsibility clearly fascinates him.

It creates a space to explore extreme environments and an opportunity to describe the sensitivity of someone who is trying to desensitise himself. There is room to have the civilised and the uncivilised, the nice and the ugly, the gentle and the tough, collide in dramatic ways. It is also a good fit for Noer himself, who is part rowdy jackass, intellectual thinker, provocateur and sensitive family man.

Following Northwest, Noer’s next project is set among old people in a nursing home. It would be very unlike the director not to have the story embrace people who are going through a liminal drama, as they take another step away from innocence and into the adult world.