Greek mythology and Nordic fables are some of the inspirations for Esben Toft Jacobsen’s second feature, the Swedish-Danish co-production  Beyond Beyond. But above all the story is propelled by the director’s inner visions. The director’s feature debut The Great Bear was warmly received at the Berlin film festival back in 2011.

Beyond Beyond was born when Esben Toft Jacobsen and screenwriter Jannik Tai Mosholt wrote 10 lines describing the kind of story they would like to see. Toft then spent three months drawing and painting – characters, situations, moods. He had plenty of fascination points but no skeleton to hang his story on. When he had covered every wall of his office in drawings, he asked Mosholt to drop by. “We now had a starting point to work on the story,” Toft Jacobsen says. “We deliberately didn’t write very much before I started drawing, because we wanted to let the images decide.”

Mental images and intuition are the main guides for the visually oriented director in his work. He’s currently in full swing producing Beyond Beyond, a stereoscopic, 3D-animated feature about a little boy rabbit who goes on a fantastic and perilous quest to find his mother in the Realm of the Feather King.

You can do much crazier things in animation than in live action, and that gives you a lot of freedom in your storytelling.Esben Toft Jacobsen

A bit of TLC on the details

Unlike the intimate process of making his first feature, The Great Bear, which had the whole crew in one room, Toft Jacobsen is now working with a production team of 21 people divided among Copenhagen, Stockholm and Gothenburg. He had some initial concerns about the geographical spread, but now he loves it.

“It’s a privilege to be able to pick and choose among skilled people in Sweden and Denmark,” he says. “Both countries have a huge talent pool. We work on Skype a lot, which is a great fit for our workflow. And ever so often I’ll go to Sweden to prove that I actually exist.

“The whole big, expensive machine,” as he puts it, is in motion to craft Beyond Beyond’s lush images and expressive visual design and he is relishing the opportunity to lavish some TLC on the details. For instance, they hired a special artist, a “groomer,” just to make the characters’ fur and beards pop. 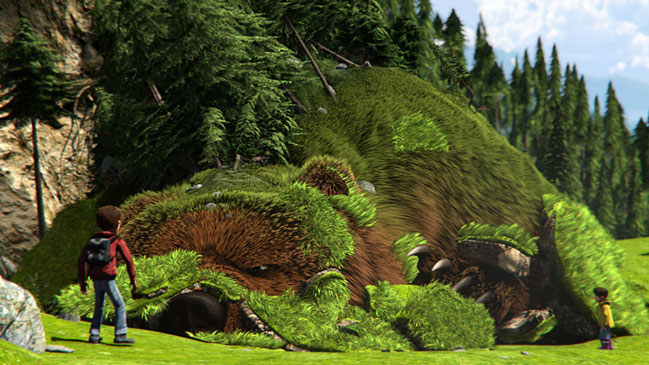 “In The Great Bear, we were going for a slightly raw and unpolished look. Now, we want Beyond Beyond to look really slick, with lots of detailing. We are also making a dedicated effort to exploit the 3D effect and create depth in the images. We are conceiving in 3D. That’s the case when we move between the film’s two worlds, a relatively realistic world and the fantasy world of the Feather King’s Realm. When we enter the fantasy world, we move from a low angle into the image. Returning to the realistic universe, we move in the opposite direction, out at an angle.”

Once again, the Nordic storytelling tradition is seen to be lurking right under the surface of the director’s films. When Toft Jacobsen made The Great Bear, he mentioned Astrid Lindgren and Tove Jansson as his role models with their fantastic tales and animated nature. But in Beyond Beyond, he is also drawing on nature religions and Greek mythology, including the tale of Orpheus and Eurydice. His protagonist, the little boy rabbit, is looking for his mother. She is in the spirit world of the Feather Kings’ Realm and the little rabbit finds her by sneaking in a backdoor. The spirit world is a colourful and magical place.

“You can do much crazier things in animation than in live action, and that gives you a lot of freedom in your storytelling. But above all, the story has to be touching. And the film’s target audience, 6-9-year-olds, have to feel safe in the protagonist’s company. He may be just a little rabbit, but he has the tenacity to get things done. Nothing fazes him. Holding him by the hand, you’re not afraid to enter an unknown world populated by strange, crazy creatures.”

Alongside the film production, the wheels are in motion to finance a cross-media product. Toft Jacobsen, who has produced games before, is co-developing a tablet game with the working title Beyond the Game. The cross-media production uses the film’s characters and universe, but story-wise it moves beyond Beyond Beyond and explores other paths of the story.

Beyond Beyond is a co-production between Copenhagen Bombay of Denmark and CB Sverige of Sweden, with Film i Vest and Noble Entertainment. The film is supported by the Danish Film Institute, the Swedish Film Institute and the Nordic Film & TV Fund.

Artwork from Beyond Beyond and framegrab from The Great Bear

Born 1977, Denmark. A former student of visual communication at the Danish Design School, Toft Jacobsen graduated in animation direction from the National Film School of Denmark in 2006. He has worked as a freelance artist and animator on numerous computer games.

Toft Jacobsen’s first animated feature, The Great Bear, was warmly received at the Berlin film festival in 2011, enjoying its world premiere in the Generation Kplus children’s section. Beyond Beyond is a Swedish-Danish co-production and is Toft Jacobsen’s second feature.

Beyond Beyond in our Cartoon Movie catalogue