For many families in the suburbs of Los Angeles, their peaceful middle-class existence is just a facade. What lies beneath is sheer domestic turmoil: Teens addicted to drugs, breaking the law and engaging in violent outbursts, and parents at their wits’ end. Interventionists, like Evan “Bullet” James and Dana “Hodges” Goller, specialize in entering these suburban homes during the night ripping troubled teens from their beds to transport them, against their will, to a reform school in Utah.

Crafted in director Jon Bang Carlsen’s signature hybrid style, the film is about the complicated relationship between parents and children and how the wounds we incur within our families can seem the hardest to heal.

Just the Right Amount of Violence is produced by Helle Ulsteen for Kamoli Films and Jon Bang Carlsen for C&C Productions.

“This story is fundamentally different from the type of story I normally do. I’m not used to chasing dramatic events with my camera. I’m used to shooting in places where nothing happens and the fact that a camera crew is coming ideally serves as a welcome diversion from the day-to-day. In that way, most of my films have been a kind of game, both behind and in front of the camera. But you definitely can’t say that about Just the Right Amount of Violence. On the contrary, it was a struggle to even get anyone to come forward.”

I'm Not Out to Judge

Jon Bang Carlsen originally planned his new film, Just the Right Amount of Violence, as a relatively straight documentary, but the project ended up as one of the most genre-blending works of the 63-year-old filmmaker’s long career.

A quiet suburban street in southern California. Families live here, raise their children here. It’s a safe and stable place. But what’s this? At the crack of dawn a car rolls softly through the sleeping picture-book streets like a predator on the prowl. Two men exchange hushed words inside the darkened vehicle. They are looking for an address, find it, park, get out and go to the front door. They have been expected. The man of the house lets them in and takes them to an upstairs bedroom, where his teenage son, Simon, is asleep. The two men overpower the boy and, with his father looking passively on, bundle him into the car and drive off. Away from the suburbs. Away from safety and security. Into the desert and beyond, to southern Utah, where they check the kid into a prison-like facility.

Actually, Just the Right Amount of Violence ended up as a hybrid film more out of necessity than choice. Originally, the always imaginative and experimenting Jon Bang Carlsen had wanted to try something else this time, along the lines of a “real” documentary. The subject – an intervention industry specialising in abducting troubled teens from their homes and delivering them to rehab centres – already holds so much drama and does not immediately seem to call for any special creative devices. But after years of research and visits to several facilities (primarily in Utah) where abducted teens are placed, the Danish filmmaker had to face the fact that he had moved into a world this time where cameras are anything but welcome. 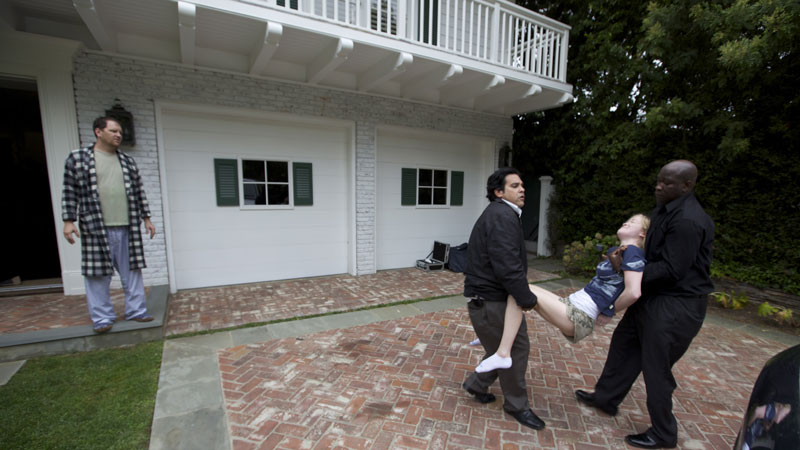 “The main challenge with this film definitely was getting anyone to be in it,” Bang Carlsen says. “After my more essayistic South African films, where I put myself in the picture, I had imagined that I would now go back to making films where I could quietly disappear behind the camera again. I felt no need to stage anything in this context, since the reality itself is already a kind of dramatization. I mean, actual abductions are a kind of dramatization. The drama and story were already embedded in the material, and all I had to do was try to capture some of it in a cinematically interesting way.

“So, my original idea was simply to track a father and son through the whole sequence of events, from the abduction to the stay at the school and their reunion. But I just could not make that happen, and so I had to find another way of doing it. Perhaps, the fact that this story is fundamentally different from the type of story I normally do has something to do with it, too. I’m not used to chasing dramatic events with my camera. I’m used to shooting in places where nothing happens and the fact that a camera crew is coming ideally serves as a welcome diversion from the day-to-day. In that way, most of my films have been a kind of game, both behind and in front of the camera. But you definitely can’t say that about Just the Right Amount of Violence. On the contrary, it was a struggle to even get anyone to come forward.”

I wanted to tell this story because it’s an example of the eternal and sometimes fatal struggle that goes on in any family.Jon Bang Carlsen

As the film makes clear, most of the facilities where the teens are placed are located in Utah and run by Mormons. Would you say that the whole abduction phenomenon primarily has a religious bent?

“No, I wouldn’t say that. The reason why most of these schools are based in Mormon-dominated Utah is that Utah’s state laws give parents more legal rights than elsewhere – not least compared to California, where many of the clients are from. But even in Utah there are limits to how far you can go. In fact some of the strictest schools have had to relocate to Central America, because the things that go on there simply aren’t legal in the USA. However, from the beginning I decided not to go after the toughest places, because it’s not the schools as such that interest me. What I was looking for was a father-son relationship, where the father basically loves his son and wants what’s best for him, but suddenly finds himself in a situation where he has closed his world off to the point that his son – in order to be allowed to define his own world – will invariably clash with him.

“Once that is said, I should add that most of the schools I visited when I did my research – even if they had toned down the religious aspect a bit for commercial reasons – were dominated by big, heavy Mormon characters with a way too clear idea of what life is. Things like doubt and other difficult phenomena are totally absent from their worldview. And, while I can’t rule out that good schools might exist, most of the ones I saw were grotesquely harsh.

“Nonetheless, I don’t think it was up to me to judge. I’m not a journalist and I didn’t make my film to judge one party or the other. I wanted to tell this story because it’s an example of the eternal and sometimes fatal struggle that goes on in any family, that is, being allowed to grow freely within a context of love that might turn into a jail that cripples you. But of course, American realities in many ways are different from, say, Danish realities. If you’re a father in Los Angeles and you find your teenage son drifting away and disappearing into places you wouldn’t dare go yourself, you have to do something. There’s a real possibility of losing a child like that and, as a father, you can’t just stand idly by and watch that happen”.

Just the Right Amount of Violence, selected for IDFA’s Masters section, is produced by Helle Ulsteen for Kamoli Films and Jon Bang Carlsen for C&C Productions. Most of Jon Bang Carlsen’s films will be available on a streaming app from the beginning of 2014. For more information, see jonbangcarlsen.com.

Just the Right Amount of Violence in Danish Film Catalogue 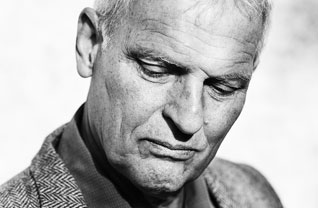 Director Jon Bang Carlsen, 63, is considered the grand old man of Danish auteur documentary film. He has written and directed more than thirty films, both documentaries and feature films. The director’s signature hybrid style combines documentary and fictional interpretations, and many of his documentaries are visually and symbolically powerful, often staged portraits of marginal figures and milieus. Read about his method and films below.

True to the method he has refined over four decades, Jon Bang Carlsen in his film mixes reality, fiction and personal reflection. The two men who abduct “Simon” in the opening sequence of Just the Right Amount of Violence are real-life “interventionists,” but at the end of the film it’s revealed that the sequence is a reconstruction. And the character of “Simon”? He’s played by an actor.

Later in the film, we meet another young man, Taylor Green, who has actually been through the system and is now looking back at the experience. Meanwhile, in between the fictional and documentary elements, the filmmaker weaves another layer, an autobiographical and essayistic frame of explanation, in which he reflects on his own experiences as a son and a father.

Accordingly, Just the Right Amount of Violence ties into the recent trend of hybrid films where essentially documentary material is put into a framework that also questions conventional notions of reality and truth.

The concept is hardly new to Bang Carlsen. The director introduced his brand of “staged documentarism” in his breakthrough, Jenny (1977), refining and perfecting the method  in later films like Hotel of the Stars (1981), The Phoenix Bird (1984) and Before the Guests Arrive (1986). What drove him was the recognition that the reality that is presented in any kind of film has always been around the back of the filmmaker’s eyes and so can never be anything but a subjective interpretation.

For Bang Carlsen – and likeminded filmmakers – the camera is never just a surveillance tool. It’s a pen for writing poetry based on your perceptions, a brush for painting the impressions you get from observing the world you’re living in.

It’s hard to imagine a better location for a staged documentary than a hotel full of extras and acting hopefuls in the late ’70s legendary Montecito Hotel in the heart of Hollywood.

In this “documentary comedy” about a lovesick bachelor on the west coast of Ireland, Bang Carlsen pushed his methods even further by furnishing the characters with a story that is only partly their own.

Alongside It’s Now or Never, this behind-the-scenes documentary serves as an essay on the director’s methods and reflections, like a magician revealing his tricks.

This first instalment of Bang Carlsen’s South African trilogy has the director turning over a new leaf. His encounter with the harsh realities of South African life resulted in a more classic documentary form.

Just the Right Amount of Violence in Danish Film Catalogue