With Klown Forever, the comedic duo of Casper Christensen and Frank Hvam are adding a new chapter to the saga of Casper and Frank, two by now middle-aged comedians with success but still suffering from a spotty sense of propriety and a spinning moral compass. Underlying the naughty jokes is an intention to show life as it is – even when it hurts.

Over 10 years, 60 TV episodes and now two feature films, Frank Hvam, 44, and Casper Christensen, 47, have crafted the Klown universe from a complex mix of fact and fiction featuring over-the-top versions of themselves at the heart of the hi-jinx. But the cringe-inducing comedy that the duo specialises in often walks hand in hand with a tragicomic look at the psychology of (certain types of) men and everyday life in general.

In the first Klown film from 2010, directed by Mikkel Nørgaard, Frank tries to convince his girlfriend, Mia, that he’s adult enough to bring children into the world. To prove this point to Mia, he takes her nephew on a canoeing trip – a trip that Casper had been planning to use to cram in as much infidelity as possible. Their friendship is tested but survives, and Frank even proves his potential as a father, though in some pretty roundabout ways.

“We expose the idiotic nature of men, which is the cause of most disasters. But there’s also a female lack of understanding going on.”Casper Christensen

Their new film, Klown Forever, also with Mikkel Nørgaard at the helm, is mainly about two friends who betray their friendship, as real-life Frank Hvam puts it. Casper wants to party in bars and have a career in Los Angeles, while Frank is living a somnambulist family life as the father of small children.

FILM sat down with Casper Christensen and Frank Hvam to talk about men, friendship and being true to their characters up to the premiere of Klown Forever:

Q: In the first film, we left Frank as he was about to become a father. How did you use that as a jumping-off point for the sequel?

Casper: Our first idea was to set the sequel nine months after the first film. But that began to feel dishonest and would also be a break with the real time we have been operating with. We realised that it would add something to the story that Frank had children – as a first in the Klown universe. Having him be a decent person who does what’s expected of him. But of course, we had to get him out of the house and poke him to bring out his old, selfish self. 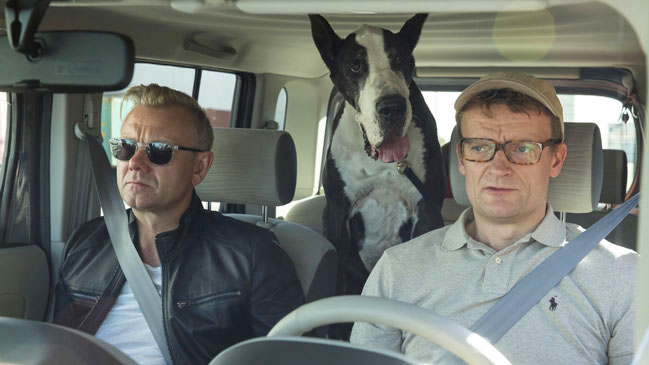 Q: Both films show women taking over the home and how hard it is to be a man today. Frank is, if anything, henpecked. Is that also why you portray friendship as being more important than ever?

Casper: My friendship with Frank has lasted longer than my relationship with any woman, so it’s still very precious and I’d go to great lengths to preserve it. That’s what the film is about: How far are you willing to go to keep a long friendship?

The film shows Mia’s preferred version of day-to-day life, which is also the most reasonable one when you have two small children. She is very domineering, which is pretty natural, too, when you have children. She has no problem adapting to that kind of routine, but Frank does, because it would cost him his friendship. We expose the idiotic nature of men, which is the cause of most disasters. But there’s also a female lack of understanding going on.

Frank: The film is about how you can’t just sink into the morass of the nuclear family, safe in the conviction that your friendships will last, even if you don’t nurture them. But it’s also about how a long friendship is both ugly and beautiful – it can’t be beautiful all the time. Sometimes your best friend is an asshole, and you have to understand and accept that or you’ll get disappointed and leave.

Casper: When you’ve been friends for a long time, you see the whole person.

Frank: Also, it’s about how when you reach a certain age, you can’t keep trying to get back at people but just have to forgive them. The film paints a picture of a multifaceted friendship. You get entangled with each other in so many weird ways. 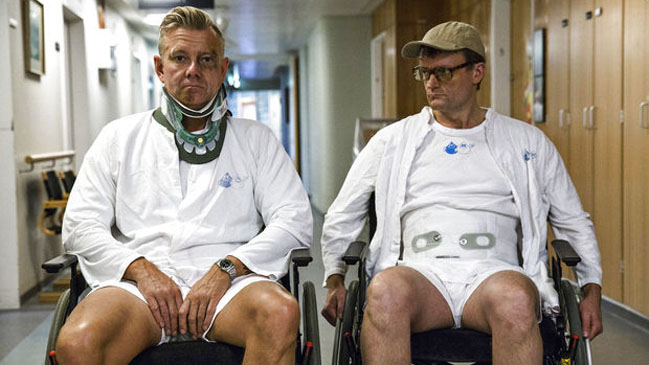 Q: There seems to be a little bit more seriousness to Klown Forever than before?

Casper: True. We show the exhaustion that a lot of families with small children know – and we show it in a way that can hurt. We tap into the emotions we had when we had small children and, to put it bluntly, were cut off from all the fun stuff.

Frank: We also strive for realism on other fronts than the emotional one. When Frank in the film goes to meet Casper in Los Angeles and drives to his house, we show the same sad route past oil fields that we took in real life. It was important for us not to be dazzled by L.A. We deliberately steer clear of stereotypical images like ‘crazy lady walking poodle that looks like her.’ When Casper throws a party in the film, the scene was inspired by actual parties Casper went to in L.A. A much tamer and more sober affair than I, at least, would have imagined.

Casper: Basically, we like to challenge the audience with what we do. We didn’t want to make a repeat of the first film. We wanted a brand new twist.

Q: Then there are the similarities between the fictional Frank and Casper and the real you – including that Frank actually does have two small children and that Casper spent a long time working in Los Angeles … 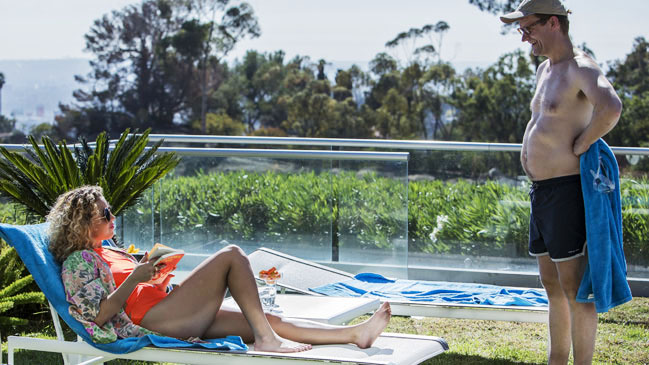 Q: Casper’s enormous need for freedom has an obvious appeal to men. Why do you think the Klown universe also has so many female fans?

Casper: Because they get to peek into an otherwise closed world, I think.

Frank: And take notes and gather ammunition for their own relationships …

Casper: Men are and always will be the biggest idiots in our universe, but we also give Frank’s girlfriend Mia a few chinks in her armour – like the time in the TV show when we had her shoplift for kicks.

Q: Do you have specific roles when you brainstorm and write?

Casper: Frank sometimes has a completely different angle on some things than I have. Like, he once asked if you wouldn’t always instinctively rather help a rich person than a poor person. If you see a cool Jaguar broken down by the side of the road, there might be a reward in it for you [both guffaw]. That’s just such a crazy statement! Our logic is different, so we learn from each other.

Frank: We always start from some instinct …

Casper: … and then we bring up the good manners later. So it ends up in a place where we also help out a stranded family in a Seat.

Q: Who are your heroes of cringe comedy?

Casper: He’s in a league of his own. We saw Borat together and it not only had us rolling in the aisles, we were also deeply impressed by his courage. That kind of courage I don’t think I, or Frank, have. Cohen literally risks life and limbs for his comedy in the real world.

Q: Even so, you once again have several nude scenes in Klown Forever …

Frank: And when we decide to do a certain scene, we show it. We don’t try to skirt the issue, like cutting to an exterior of the house when events inside get graphic. We stay with the situation. It’s all we know how to do. We address things head on, even if it’s ejaculating on your mother-in-law’s face (in the first film, Klown, ed.).

But in the editing room, if we realise that something is just there for the shock value, we cut it out.

Casper: We cherish the trueness of the situations and the characters. 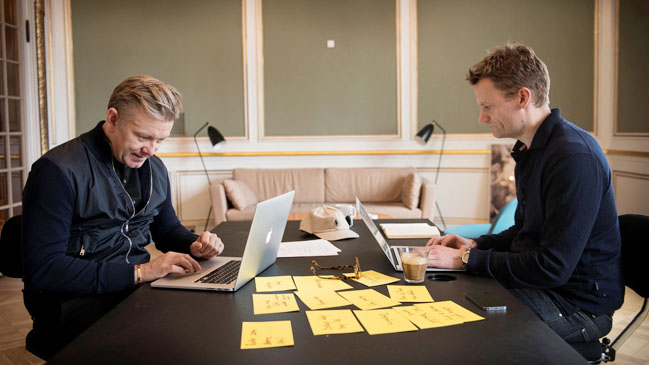 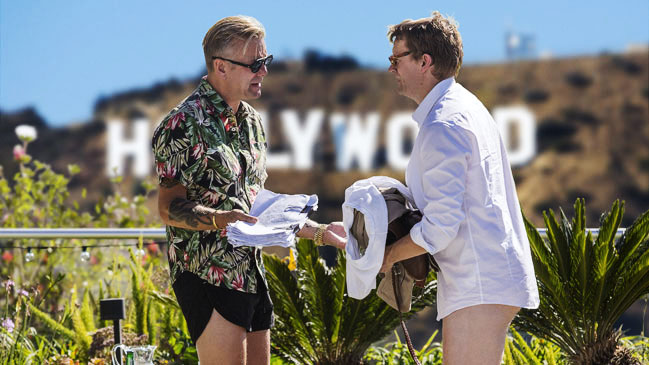 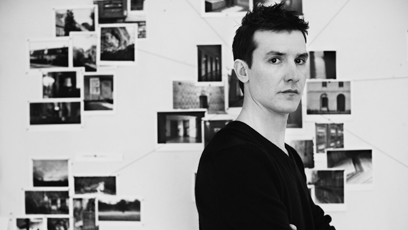 Mikkel Nørgaard. Born 1974, Denmark. Directed the Clown show (2005-09) and made his feature debut with the first film version of the series, Klown (2010), winner of Best Comedy and Best Screenplay at Austin Fantastic Fest and the main prize at the Fantasia Film Festival in Montreal. Nørgaard directed the two adaptations of Jussi Adler-Olsen’s crime novels, The Keeper of Lost Causes (2013) and The Absent One (2014).
Klown Forever, the second feature about the two comedians Frank and Casper, is directed by Mikkel Nørgaard and based on a script by Casper Christensen and Frank Hvam. The film makes its world premiere at L’Étrange Festival in Paris (3-13 September), moving on to its North American debut at the Austin Fantastic Fest (24 September – 1 October).

KLOWN / 2010 Frank finds out by accident that his girlfriend Mia is pregnant and that she failed to tell him because she doesn’t think he has “fatherhood potential.” Desperate to prove her wrong, Frank “kidnaps” Mia’s nephew and brings him along on his and Casper’s canoe trip – to Casper’s great frustration, having planned the trip as a secretly adulterous weekend outing. As the three paddle downstream from one chaotic misadventure to the next, the trip culminates in a string of events that force Frank and Casper, finally, to step up to the plate. The film became the biggest local box-office draw in a decade and screened to enthusiastic audiences at North America’s biggest genre festivals, Fantasia in Montreal and Fantastic Fest in Austin.
KLOWN FOREVER / 2015 Five years have passed, and Casper and Frank are standing at a crossroad in their lives and friendship. Casper has moved to Hollywood to pursue his dream of fame while Frank, now the father of two small children, is engulfed in the routines of family life. What is it they want? And what do they really mean to each other, when it all comes down to it? In an attempt to save their friendship, Frank travels to Los Angeles – but as always, nothing works out quite as planned when Frank and Casper head off on an adventure.
REMAKES The TV show has been sold for remake in Belgium (seasons 1-2 have been commissioned), Germany, Finland and Holland (seasons 1-3 have been commissioned). Both the series and the first feature have been sold for an American remake, with Sasha Baron Cohen connected to the project.
BONUS INFO Casper Christensen and Frank Hvam are writing the script for Sasha Baron Cohen’s next film, The Lesbian, produced by Paramount Pictures. Casper Christensen is also writing on two TV series, for HBO and FX, and a feature film for Marc Forster.