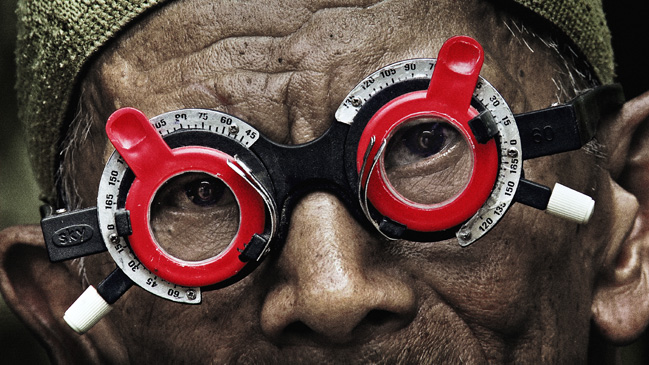 Look of Silence, The

15. nov 2019 | IDFA 2019. Jørgen Leth's intimate self-portrait 'I Walk' is world-premiering in the Competition for Feature-Length Documentary, while the Danish filmmaker will be honoured with a Lifetime Achievement Award.

Jørgen Leth and Eva Marie Rødbro in competition at IDFA

23. oct 2019 | IDFA 2019. Jørgen Leth's 'I Walk' is selected for the main Feature Length competition at IDFA, while Eva Marie Rødbro's 'I Love You I Miss You I Hope I See You Before I Die' is revealed for the First

08. oct 2019 | IDFA 2019. IDFA pays tribute to distinguished auteur Jørgen Leth at the upcoming doc fest. Also, a number of Danish titles have been announced so far for the festival, running from 20 November.

Awards Season for The Look of Silence

26. feb 2016 | AWARDS SEASON. "The Look of Silence" is nominated for an Oscar for Best Documentary Feature. See the honours that Joshua Oppenheimer's gripping film has been awarded during Awards Season, culmitating with the

Not enough hours in the day for us to talk

09. feb 2016 | INTERVIEW. It has been nearly 10 years since producer Signe Byrge Sørensen first hooked up with director Joshua Oppenheimer and one of the most fruitful cinematic partnerships of the new millennium took root.

15. jan 2016 | INTERVIEWS. Tobias Lindholm's "A War" is nominated in the foreign-language category for the upcoming Oscars, while Joshua Oppenheimer's "The Look of Silence" is one of the five documentary feature nominees.

14. jan 2016 | OSCAR 2016. Two Danish films enter the final run in the world's most prestigious film event: Tobias Lindholm's "A War" in the Foreign Language Film category and Joshua Oppenheimer's "The Look of Silence" in the

23. nov 2015 | THE LOOK OF SILENCE. What do Amy Winehouse, Iris Apfel, and Adi Rukun have in common? They are all "Unforgettables," Cinema Eye's list of this year's most notable and significant nonfiction film subjects – from the

03. sep 2015 | OSCAR 2016. "A War" by Tobias Lindholm, "Men & Chicken" by Anders Thomas Jensen, and "The Look of Silence" by Joshua Oppenheimer are shortlisted for Denmark's Foreign Language entry, with the final

"Reaction Has Been Very Deep"

23. jun 2015 | INTERVIEW. "The Look of Silence," produced by Danish company Final Cut for Real, is currently playing in UK cinemas and opens in the US in July. We caught up with Joshua Oppenheimer who tells about highlights

04. mar 2015 | FESTIVAL. Three Danish documentaries, a short and an animated short are heading for South by Southwest, opening on 13 March in Austin, Texas.

Revealing the fiction of our reality

21. feb 2015. Joshua Oppenheimer reflects on what the process of making The Act of Killing and The Look of Silence has taught him, and how he sees his role as documentary filmmaker today.

The Look of Silence and Flotel Europa win prizes in Berlin

12. feb 2015 | BERLIN. "Antboy – Revenge of the Red Fury" had its international premiere Monday in Generation Kplus. The ten Danish films selected for this year's festival range from tales of superheroes over TV drama to

01. feb 2015 | AWARDS. "In Your Arms" by Samanou Acheche Sahlstrøm was named Best Nordic Film at Göteborg Film Festival, announcing its winners on Saturday. Among these were also Joshua Oppenheimer's "The Look of Silence"

The Look of Silence in Indonesia on Human Rights Day

11. nov 2014. "The reception has been far beyond what I could have hoped for." Talking to FILM about the reactions to "The Look of Silence", Joshua Oppenheimer recalls the powerful experience of watching his film

Holding a Mirror to Horror

11. nov 2014. "The Look of Silence" sees Joshua Oppenheimer back in uncharted territory. While "The Act of Killing" took a surreal look at Indonesia's genocide through the imagination of the killers, his follow

11. nov 2014. Signe Byrge Sørensen has produced both of Joshua Oppenheimer's films bringing to light the human consequences of the Indonesian genocide. Her collaboration with the American-born director has proven

10. oct 2014. CPH:DOX 2014. Scandinavia's largest documentary film festival has revealed 12 titles in their main competition section, the DOX:AWARD, including the two Danish films "The Look of Silence" and "1989"

The Look of Silence Wins in Venice

29. aug 2014 | VENICE. We picked up a few headlines from the first reviews of Joshua Oppenheimer's "The Look of Silence," premiering at Venice Film Festival.

26. aug 2014 | ROOS AWARD. Walking the red carpet in Hollywood was probably the last thing on Signe Byrge Sørensen’s mind when she started grappling with the 1000 hours of footage that would eventually become "The Act of

24. jul 2014 | FESTIVAL. The eagerly anticipated Danish-produced documentary "The Look of Silence" is selected for competition at the 71st Venice Film Festival. Out of competition, Lars von Trier reveals in full his epic

Joshua Oppenheimer was nominated for an Oscar in 2014 for “The Act of Killing” which has won huge international acclaim since its world premiere at Toronto Film Festival in 2012.