Peppered with songs and jazzy tunes, Mini and the Mozzies is the story about Mini the beetle who works in a flea circus­ together with Egon the Cycling­ Mosquito and Dagmar the Dancing­ Mosquito. One day, Mini runs away­ from the circus and embarks on an­ adventure which involves a gang of­ robbers led by Basse the Beetle and­ the two bee princesses who adopt him as their pet.­

Flemming Quist Møller and Jannik­ Hastrup have put their separate thumbprints all over Danish animation for close to a lifetime. The duo made the animated classic Benny’s Bathtub in 1971, now included in the official Danish film canon. From there, their career paths diverged. In 2007, they teamed up again to make A Tale of Two Mozzies, their first film centring on the colourful universe of Egon and his friends, based on a hugely popular children’s book by Quist Møller.

Mini and the Mozzies is­ produced by Marie Bro for Dansk Tegnefilm. The film is selected for Generation Kplus at the Berlinale.

“We want to entertain children with a story and a cast of characters that deal with subjects like bullying and friendship but in the shape of an adventure.”

“We don’t care to make a film which we ourselves wouldn’t want to go and watch at the cinema.”

Adventures of Beetles and Bugs

Mini and the Mozzies is a tie-dye bright story of bullying and friendship, brought to life in a simple cutout technique and peppered with jazzy tunes and anarchic humour. Co-directors Jannik Hastrup and Flemming Quist Møller have put their thumbprints  all over Danish animation for close to  a lifetime now.

Say hello to Miranda the Girl Flea, Dagmar the Dancing Mosquito and Egon the Cycling Mosquito. Meet the gloomy Caterpillar, Basse the Dung Beetle, Dumrik the Assassin Bug and Snothas the Cockroach.

And above all, tip your hat to Mini the Beetle, the star of Jannik Hastrup and Flemming Quist Møller’s Mini and the Mozzies. Their new film is that rare thing – art for a young audience with songs and music, humour and depth, wit and grit. Bullied out of the flea circus after an awkward fail, title character Mini the Beetle goes astray. But no road is so thorny in Hastrup and Quist Møller’s generous universe that it fails to lead back to the flea circus and Mini’s friends, to happy reunion and reconciliation.

“We want to entertain children with a story and a cast of characters that deal with subjects like bullying and friendship but in the shape of an adventure,” the two directors say. Like its 2007 predecessor, A Tale of Two Mozzies, the new film’s universe and characters are based on Flemming Quist Møller’s timeless 1967 children’s book about the two mosquitoes Egon and Dagmar. Once again, the two directors are working in a classic cutout technique.

While computers were used to animate the characters, the drawings are handmade and you don’t sense the presence of digital technology. In other words, Hastrup and Quist Møller’s tactile poetry is a far cry from the slick, turbocharged computer animations that the Americans, in particular, master to perfection. 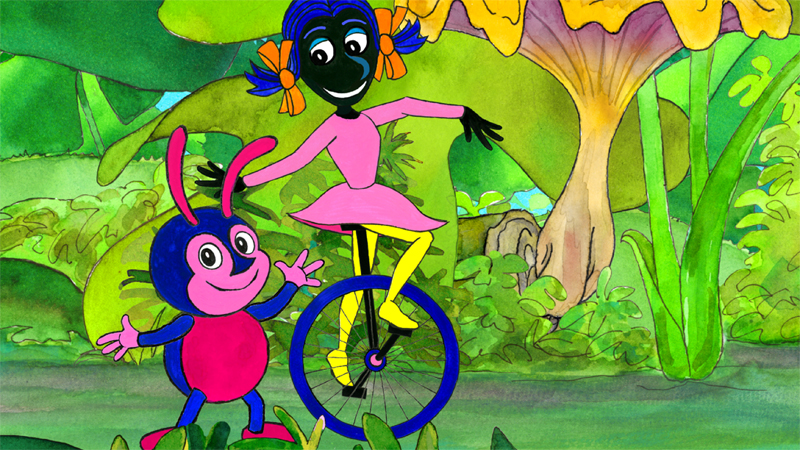 For Children and Adults Alike

Mini the Beetle first charmed audiences as a side character in A Tale of Two Mozzies and eventually Hastrup and Quist Møller thought he deserved to be the star of their second film set in the buggy world of Egon and his friends.

But the ambitious veterans are not content to just reach a new children’s audience with their latest collaboration. Characteristically, the satirical subtext ensures that an adult audience, too, will be amply entertained by Mini and the Mozzies.

“What we really want to achieve is telling a story that even the youngest audiences can enjoy and identify with, while at the same time appealing to their parents. We don’t care to make a film which we ourselves wouldn’t want to go and watch at the cinema,” Hastrup and Quist Møller say. 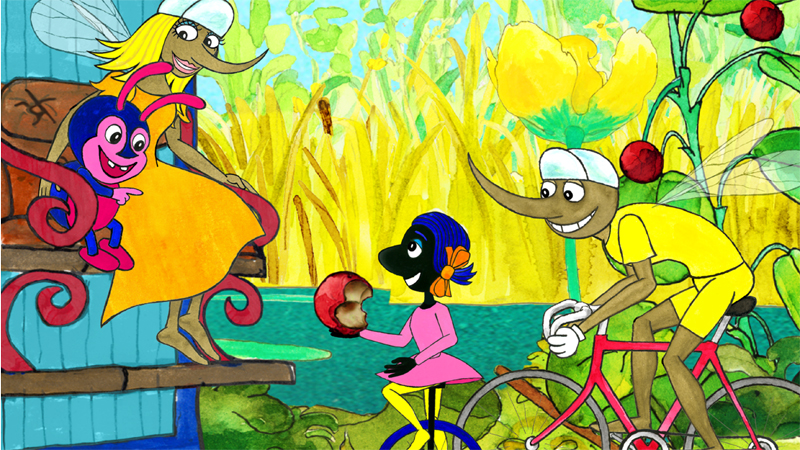 For close to a lifetime now, Quist Møller and Hastrup have put their thumbprints all over Danish animation.

They first met in an advertising studio in the early 1960s and made a few, quirky animated shorts together. Their creative partnership peaked with 1971’s Benny’s Bathtub, an animated feature about a boy who explores a magical world at the bottom of his bathtub. Revered for its highly imaginative style, the film is included in the official Danish film canon. 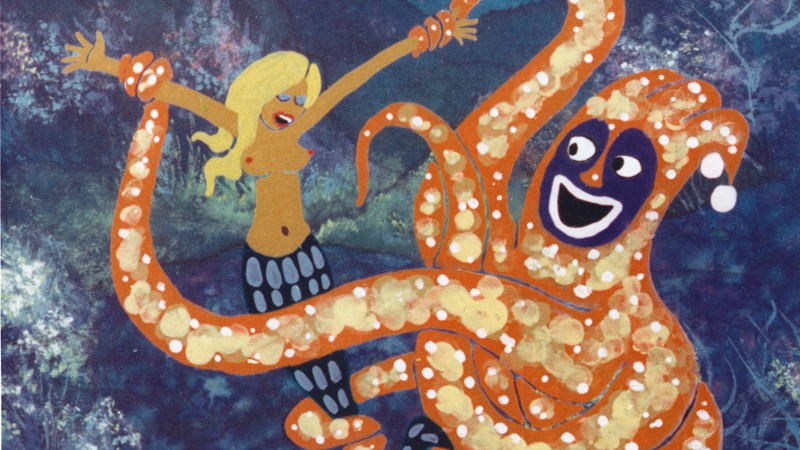 The partners then went their separate ways. Hastrup created his famous children’s TV series about Circleen and her mice friends (1968-70) and series of films with a political content that would be a defining characteristic of the director. Hastrup’s heart is on the left and beats for the world’s small and vulnerable beings. He next brought out a number of now classic theatrical animated films, including Samson & Sally (1984), War of the Birds (1990), The Monkeys and the Secret Weapon (1995), and three features, including Little Big Mouse (2004), starring his hugely famous Circleen with spiky black hair and a polka-dot dress who sleeps in a matchbox on the artist’s desk.

Quist Møller, continuing along a parallel but more rounded and gently satirical path, made three popular animated films and a TV series about the fantasy creature Hugo. Jungle Jack (1993), The Movie Star (1996) and Jungo Goes Bananas (2007) are contemporary classics in Denmark, where children and their adults love the rare, lovable, self-involved, sly and temperamental, food-loving and drop-dead charming Hugo, who, it is said, embodies a big chunk of the Danish national character.

When the two filmmakers finally reunited professionally and co-directed their first feature in 36 years, A Tale of Two Mozzies, their chemistry was clearly intact. The success of the film naturally led to a second opus, Mini and the Mozzies, featuring Miranda, Egon, Mini and all the other half-inch heroes •

Mini and the Mozzies is selected for Berlinale’s children’s programme Generation Kplus. The film is produced by Marie Bro for Dansk Tegnefilm.

Mini and the Mozzies in Danish Film Catalogue

Jannik Hastrup and Fleming Quist Møller are swordfish in the fish tank of animation (…) Their handmade drawings make a last stand against computer animation. The pace is mellow, the tone by turns wacky and profane. The subtext excels in satirical messages, which will likely go over the heads of the target audience but register with their grownup companions. Mini and the Mozzies is sweet and sharp, just like the old days, when the zeitgeist sided with the losers.

Jannik Hastrup and Flemming Quist Møller in 1971 created Benny’s Bathtub, one of the most successful Danish animated films ever. Forty-four years have passed since then and the film is still alive and kicking. Kids today watch it with glee. The film looks as fresh and energetic as it did when it came out. That’s quite a feat. Funny, fast-paced, well told, lushly animated and bubbling with abundance. The same can be said about the two gentlemen. They are still delivering high quality and high spirits.

Gunnar Wille, Head of Animation and Game Design at the National Film School of Denmark

I grew up with their films and always thought that, while they were fun and immediate, they were also mysterious and alluring. They have a jazzy unpredictability with clashes between children’s and adult worlds. Their anarchic characters always have a great time. There is something handmade and playful about the films. They simply look like they were fun to make. They inspired me to believe in the legitimacy of a loopy imagination, that by all means you should make films that look like themselves and not like other films that are already out there.

Esben Toft Jacobsen, Beyond Beyond, The Great Bear

Flemming Quist Møller has an amazing ability to create and play with his characters. He knows how to write a good story and his dialogue is bursting with humour and energy. In the same spirit and with the same audacity, Jannik Hastrup has the ability to bring life to the events, to balance the touching and the magical, drama and fantasy, and always on the eye level of, and in solidarity with, the little ones.

Director, musician and writer and illustrator of  children’s books, born 1942. Director, with Jannik  Hastrup, of the animated classic Benny’s Bathtub (1971). Co-director and writer of the three animated  features starring the popular jungle beast Hugo (1993,  1996 and 2007). Director, with Hastrup, of two films based on his own popular 1967 children’s book: A Tale of Two Mozzies (2007) and Mini and the Mozzies (2014), both selected for the Berlinale’s Generation Kplus.

Producer at Dansk Tegnefilm. Has worked in animation as producer and production manager since 1985. Films include Jannik Hastrup and Flemming Quist Møller’s Mini and the Mozzies and A Tale of Two Mozzies (2014, 2007) and most of  Hastrup’s features including Little Big Mouse (2004),  The Boy Who Wanted to Be a Bear (2002), Hans Christian Andersen and the Long Shadow (1998).

Mini and the Mozzies in Danish Film Catalogue