CO-PRODUCTION. She cried the first time she read the first draft for Mountain, Riina Spørring Zachariassen admits. The Danish producer has worked closely with Israeli director Yaelle Kayam since the very beginning.

Danish producer Riina Spørring Zachariassen immediately fell for Israeli director Yaelle Kayam and her feature project Mountain when they met at the Torino Film Lab in 2012.

She went on co-producing the film for Windelov/Lassen, and three years later, the film is meeting its first big audience at the festivals in Venice and Toronto. FILM asked Zachariassen about the collaboration:

Q: How did your collaboration with Yaelle Kayam come about?

Yaelle and I met at Torino Film Lab in 2012, where I participated in their Audience Design programme, and Yaelle was part of their script development course Script & Pitch with Mountain. By chance we were accommodated in the same house, and because it’s always raining and is cold in Brittany in June, we were home as much as possible. Yaelle is very open, curious and committed, both as an artist and as a human being. She talked a lot about her film and told me about the inspiration for it: that it came from the Mount of Olives in Jerusalem and its relation to the two great monotheistic religions.

It reminded me of a quote from my favorite author, John Berger: “The impulse to paint comes neither from observation nor from the soul (which is probably blind) but from an encounter: the encounter between painter and model: even if the model is a mountain or a shelf of empty medicine bottles.”

Already back then, she explained the film in images, in movements, rhythm, sound, silence, light and darkness. Her description was fundamentally cinematic. I appreciate that ability in directors, and in Yaelle.

Q: What was it about Mountain that got you into that specific project?

Initially, it was Yaelle. Then it was a sense of intuitively knowing Tzvia, the film’s central character. When I read the first draft of the script, I cried and cried …

A few weeks after we met, Vibeke Windeløv, senior producer at Windelov/Lassen, was travelling to Jerusalem, and I asked them to meet. When Vibeke felt the same way about Yaelle and the project, there was no way around it.

Q: What was your role in the production?

Yaelle and I have worked together since Yaelle showed me her first draft. We’ve participated in the Torino Film Lab together, worked on the story, pitched it to financers and funded it, along with the film’s Israeli producer, Eilon Ratzkovsky. Like Vibeke, Eilon is a veteran producer, whereas Yaelle and I were both making our first feature.

We lived together during parts of the shooting and went over the scenes at night. We worked on the character dynamics together. I recognised a lot from Tzvia and Ruben’s marriage from my own life.

Q: Tell us about the Danish crew, Jacob Kirkegaard, Peter Albrechtsen and Postyr.

We started working on the sound early, some time before we began shooting. Yaelle never had a desire to add music to the film, and the film is so site specific – without the Mount of Olives, no Mountain. The film is edited to sound artist Jacob Kirkegaard’s footage from the cemetery, the graves, wind, prayers from the minaret and the sound of church bells from the two churches on the mountain.

I know Jacob Kirkegaard and sound designer Peter Albrechtsen from my years at CPH:DOX and CPH PIX, from concerts, seminars, workshops and their work in general. They both possess an enormous curiosity, openness and sensitivity that was right for Mountain. The film is small and quiet, but completely its own, which I think they’ve both contributed to. The same goes for colour grader Sandra Klass.

Postyr was a natural choice for post production, because they share a building with Fridthjof Film, where I worked at the time. Toke Rude Trangbæk from Postyr trained me in post production back in the days. He’s a good partner, and we’ve always solved our challenges. 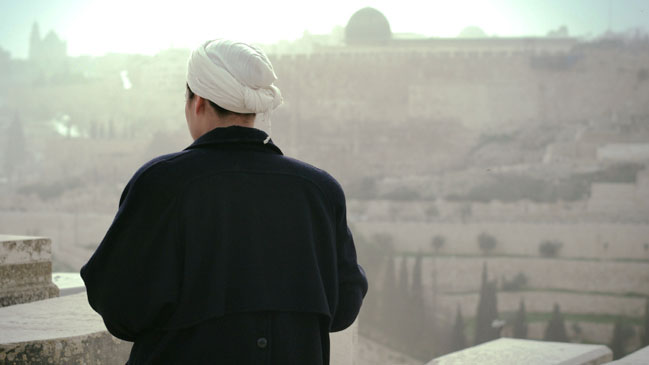 The story centres on a religious Jewish woman, Tzvia, who lives with her family in the Jewish cemetery on Jerusalem’s Mount of Olives. During the day, while her husband and children are at school, she is left alone on the mountain. She goes for walks in the cemetery, trying to escape the endless house work. One night, out of frustration, she storms out of the house, running wherever her feet will carry her, and is witness to an unsettling scene: a man and a woman are having sex on one of the gravestones. Stirred by this image, she starts exploring this new realm of the mountain while trying to keep a normal face during her daytime routine. Until she can’t any longer.
Produced by July August Productions of Israel and co-produced by Windelov/Lassen Productions of Denmark. Supported by the Torino Film Lab, the Israeli Film Fund, the Jerusalem Film Fund and the Danish Film Institute.
Mountain is the first official co-production between Israel and Denmark.

YAELLE KAYAM Filmmaker and a film lecturer at the Sapir College in Israel. Studied cinema at the Victorian College of the Arts (2004-06) in Melbourne and at the Sam Spiegel Film and Television School in Jerusalem (2006-08). Her graduate film Diploma won third place at the Cannes Film Festival’s Cinéfondation (2009) and screened at over 70 festivals worldwide. Mountain is her debut feature film, developed through the Torino Film Lab.
THE DANISH ANGLE Yaelle Kayam developed the final script for Mountain together with the film’s Danish producer Riina Spørring Zachariassen at the talent development programme Torino Film Lab, where the film in 2013 won a Production Award and in 2014 a Distribution Award.
The Danish crew includes sound artist Jacob Kirkegaard and sound designer Peter Albrechtsen, while the postproduction outfit Postyr were in charge of visual effects.
RIINA SPØRRING ZACHARIASSEN Trained as a lawyer at the University of Copenhagen and Edinburgh University. Worked at the Copenhagen Film Festivals, an umbrella organisation for CPH:DOX and CPH PIX, with a focus on industry activities. In 2012 she joined Vibeke Windeløv and Stinna Lassen at Windelov/Lassen as a freelance producer, where she has been developing and co-producing Mountain.
In April 2015, along with Norwegian producer Magne Lyngner and Danish director Martin Werner, she launched Bacon Pictures, the film production branch of the Copenhagen-Oslo-Stockholm-based hybrid commercial production company Bacon.
Read about the Danish Film Institute’s co-production programme at dfi.dk/international