Danica Curcic's radiant beauty is igniting Danish cinema. In 2014, the Serbian-born actress is starring in no less than four features, including Christian E. Christiansen's On the Edge and Bille August's family drama Silent Heart. Danica Curcic has been selected as one of the 10 European Shooting Stars 2014 to be presented at the Berlin Film Festival.

“She’s the kind of person who instantly occupies any room she enters,” the director Christian E. Christiansen says about his leading lady in On the Edge, which premiered at the Rotterdam Film Festival in January. “She has so much presence that I actually had to tone it down a bit to get the proper balance in the scenes.”

With her dark beauty and flowing black mane, the tall, commanding Curcic in many ways is a new type of young woman in Danish films.

She has so much presence that I actually had to tone it down a bit to get the proper balance in the scenes.Christian E. Christiansen, director

Serbian born and bilingual, she came to Denmark with her Serbian family at age one and has been living here ever since, though without ever becoming Danish all the way through.

“I’m probably a bit Balkan, both in my body language and temperament and in my desire to get to the meat of things. It can be a little weird to feel neither 100 percent Danish nor 100 percent Serbian. But I always tried to look at it as an advantage more than as some kind of rootlessness,” says Danica Curcic, whose given name actually means “from Denmark.”

This year, she is starring in four Danish films, including Bille August’s intimate family drama Silent Heart and The Absent One, the sequel to last year’s noir blockbuster The Keeper of Lost Causes.

Curcic was just 21 when she got her BA in film and media studies at the University of Copenhagen. She then spent the next year at the Dell’Arte International School of Physical Theatre in California.

Having seen the world, Curcic is now devoting herself to an acting career in Denmark.

It can be a little weird to feel neither 100 percent Danish nor 100 percent Serbian. But I always tried to look at it as an advantage.Danica Curcic

While movie-going audiences are only now getting to see her in big, demanding roles, we have been treated to flashes of her temper and powerful sensuality in the TV series The Bridge II (2013), where she plays a teacher who has an illicit affair with a female student, and in Laurits Munch-Petersen’s horror film Over the Edge (2012), where she is the other woman – all exotic, enigmatic allure opposite the heroine’s blond normality. In the film, she even got a chance to show off her chops at the piano, playing Erik Satie’s classic Gnossienne No. 4 – a recording that actually made it into the film.

Now, in Christian E. Christiansen’s On the Edge, about a group of young speed-obsessed amateur race car drivers, Curcic stands out as a university student who is significantly smarter than the male protagonists.

All that presence and exotic allure …

On the Edge in Danish Film Catalogue 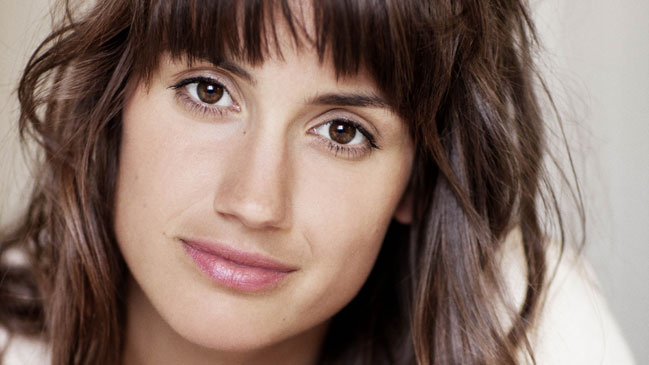 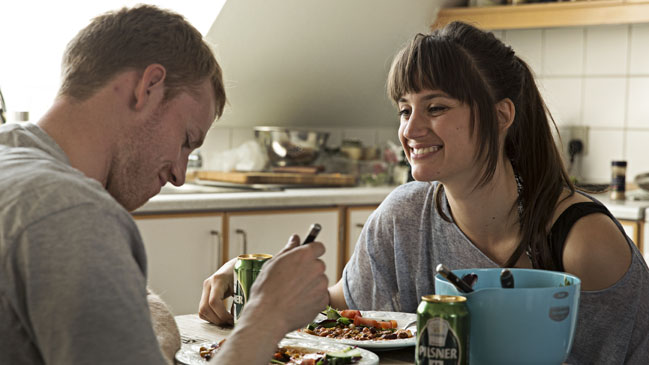 Actress, born 1985 in Belgrade. In 2014, she has major roles in no less than four Danish films: On the Edge by Christian E. Christiansen, The Absent One by Mikkel Nørgaard, Silent Heart by Bille August and Malta – All Inclusive by Hella Joof.

Curcic has appeared in several big stage productions and TV series, including Those Who Kill, Wallander and The Bridge II.

Curcic took a BA in Film and Media Studies from the University of Copenhagen and spent a year at the Dell’Arte International School of Physical Theatre in California before enrolling at the Danish National School of Performing Arts in Copenhagen, where she graduated in 2012.

Two talented young actors are accompanying Danica Curcic to Berlin this year with Danish films and partnerships on their résumés:

Born 1986. Norwegian actor based in Denmark. Trained at the National Norwegian and Danish Schools of Performing Arts.

Jakob Oftebro can currently be seen in Hans Petter Moland’s In Order of Disappearance, which has been selected for the main competition in Berlin. Soon, audiences can catch the up-and-coming actor in supporting roles in Danish director Christian E. Christiansen’s drama On the Edge, alongside Denmark’s Shooting Star Danica Curcic, and in Ole Bornedal’s epic war series 1864, the costliest Danish TV series ever. Oftebro recently appeared in the Oscar-nominated Kon-Tiki and in the Danish-Swedish TV series The Bridge. He has also played an array of stage roles, mainly at Denmark’s Mungo Park theatre, where he has been a cast member since 2008.

Edda Magnason made her feature-film debut as the great Swedish jazz singer Monica Zetterlund in Per Fly’s Waltz for Monica and also recorded the film’s soundtrack. The most watched film in Sweden last year, Waltz for Monica dominated the recent Guldbagge awards ceremony, the top Swedish film honour, as Magnason won for best actress in a lead role and Per Fly for best director. The Danish director seized the moment to praise his Swedish star: “Edda is a fantastic talent. As an actress she could be very successful. The camera loves her.”

On the Edge in Danish Film Catalogue