A lovesick monkey beach officer, a rabbit looking for his mother, a fame-hungering TV personality and an 11-year-old schoolboy who is bitten by a werewolf. These are just some of the animated characters you can meet at the European pitching forum Cartoon Movie in Lyon from 6 to 8 March. Danish animation companies are making a strong showing at the forum with five Danish productions and five co-productions with Danish participation.

“This year’s line-up is really strong,” Noemi Ferrer Schwenk says. As the Danish Film Institute’s international producer points out, well-established companies like A.Film and Dansk Tegnefilm in recent years have been joined by a number of new, smaller outfits like Nice Ninja, Copenhagen Bombay, Einstein Films and Parka Pictures.

“Producing animated features today is extremely demanding. For a small country like Denmark to have so many animation companies at Cartoon Movie is a credit to our skilled and active producers who know how to make exciting projects and get international partnerships up and running,” Ferrer Schwenk says. 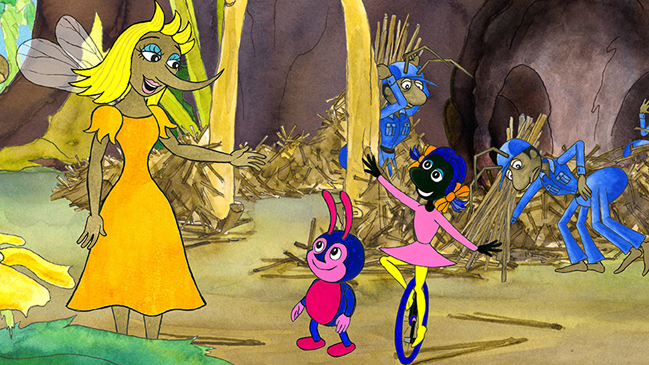 Jan Rahbek won Nordic Film & TV Fund’s Talent Pitch in 2008 for the concept that became the 2012 feature Marco Macaco. The story is about a nerdy beach officer, Marco, whose hopes of winning lovely Lulu are dashed when charming Carlo arrives on the island and builds a giant monkey-shaped casino right on Marco’s beach. The film is produced by Nice Ninja.

Miffy the Movie (a Dutch-Danish co-production) is the first adaptation of Dutch writer Dick Bruna’s popular series of Miffy the Rabbit picture books. The film, which is for preschoolers, sends Miffy and her friends on a treasure hunt in the zoo where they have to follow five clues. Miffy the Movie is directed by Hans Perk, produced by Telescreen Filmproducties of the Netherlands and co-produced by A.Film of Denmark.

In the sequel to the international hit Niko and the Way to the Stars, A.Film continues its partnership with Anima Vitae of Finland. Niko 2 – Little Brother, Big Trouble (a Finnish-Danish co-production) is the story of Niko, a young reindeer boy, who is badly rattled when his mom announces that her new boyfriend and his young son are moving in. Niko now has to live with and look after his adorable stepbrother – with regrettable results. The film is co-directed by Kari Juusonen of Finland and Jørgen Lerdam of Denmark.

Beyond Beyond (a Swedish-Danish co-production) is the second feature by the hugely talented Danish director Esben Toft Jacobsen, whose graduation film, Having a Brother, and debut feature, The Great Bear, were both selected for Berlin. Beyond Beyond is a 3D adventure about Johan the rabbit who goes on an amazing quest to find his mother. He and his father have lived alone at sea for as long as Johan can remember. One day, when Johan’s father goes for provisions and Johan is left alone on the ship, he receives a mysterious distress call about his mother. Copenhagen Bombay’s Swedish subsidiary Copenhagen Bombay Sverige is producing, with Copenhagen Bombay as co-producer.

Hocus Pocus, Alfie Atkins! (a Norwegian-Danish co-production) adapts the latest instalment in Swedish author Gunilla Bergström’s beloved series of Alfie Atkins children’s books. Seven-year-old Alfie dreams of having a dog, a playful terrier just like the one the old magician has. Since magic is all in the mind, Alfie is convinced he can use it to make his dream come true. The film is directed by Torill Kove of Norway, produced by Maipo Film of Norway and co-produced by A.Film.

Jacob Ley’s first feature, Get Santa, is a Christmas adventure. Santa’s sleigh driver Krampus tricks Julius into putting Santa into the big gift-wrapping machine, which quarters him and wraps him up in four different boxes. With Krampus commandeering Christmas, Julius goes on the adventure of a lifetime to put Santa back together again and restore people’s faith in Christmas. The film is produced by Copenhagen Bombay.

Hugo – The World’s Worst Comeback is an alternative adaptation of the Hugo the Troll video game. For Hugo, it has all been pretty much downhill since his glory days in the ’90s. Stuck in a pathetic career in the pits of the entertainment industry, community television, Hugo tries to make a comeback by going on an extreme reality show. The film is directed by Stefan Fjeldmark (Help, I’m a Fish, Terkel in Trouble) and produced by Einstein Film, whose Ronal the Barbarian was nominated for European Director of the Year at last year’s Cartoon Movie.

Mini and the Mozzies reunites veteran director Jannik Hastrup, who brought us such classics as Benny’s Bathtub, Circleen (1967-71), Samson & Sally and War of the Birds, and artist-of-all-trades Flemming Quist Møller. The film is set in the fantastical bug universe Møller created nearly 50 years ago in his classic children’s book Egon the Mozzie. Mini the mini-beetle is starring in a flea circus with Egon and Dagmar. Miranda the girl flea tricks Mini into disturbing Dagmar’s high-wire act, causing Dagmar to fall and sprain an ankle. Deeply ashamed, Mini runs away and joins a gang of robbers.

SS Martha is a tale of the high seas, in which the good old days of beer and oilcans meet capitalism, streamlining and other newfangled contraptions. The motley crew of the rusty old coaster SS Martha has been idly sailing the Mediterranean, shirking work, since 1967. But a new day is dawning. SS Martha gets a freshly graduated female captain who is set to inherit the shipping company if she can defeat her supertanker-steering brothers in a winner-takes-all race around Africa. The film is directed by Michael Hegner (Help! I’m a Fish, Niko & The Way to the Stars, Jelly T) and produced by Einstein Film.

Bitten (a Spanish-Danish co-production) is an animated tale with teeth. After he is bitten by a stray wolf, Matt, a runty 11-year-old schoolboy, experiences sudden and inconvenient hair growth – but also instincts and powers beyond imagination! Matt and his best friend Lisa vow to find a cure for the ancient curse afflicting him before the next full moon. But Matt soon discovers that school bullies are no match for a young werewolf and suddenly he is in no rush to find a cure. Based on the novel The Little Werewolf by Cornelia Funke, the film is directed by Raúl Garcia, produced by R&R Communications of Spain and co-produced by Danish Parka Pictures.

Illustration: Mini and the Mozzies, one of the projects in concept at Cartoon Movie 2013.

Cartoon Movie is a European co-production and pitching forum for animated films and is the main industry meet for European animation producers and distributors.

What’s so special about Cartoon Movie is the opportunity to present projects at any stage of the process – from the concept, development and production phases to the finished film.

Since the first forum in 1999, more than 156 films have secured total financing of 130 million euros.

In 2012, the directing team of Kresten Vestbjerg Andersen, Thorbjørn Christoffersen and Philip Einstein Lipski was nominated for the main award, European Director of the Year, for Ronal Barbaren.

The DFI and Animation

The DFI supports animation on the same terms as other fiction films. Twenty-five percent of the DFI’s subsidy funds are earmarked for films for children and youth.

In a special effort to support the growth of talent in Danish animation, the DFI in 2010 co-established the Animation Fund, which has a total budget of approx. 2 million euros.

The fund is aimed at directors who have degrees in animation, or work professionally in animation, and have not yet directed their first feature or longer TV series.

The purpose of the fund is to support original short animated films and give younger directors an opportunity to develop less expensive production methods and realise films in the kind of formats that are usually hard to finance. The films will improve the future opportunities of the directors to make films in longer formats.

The animation fund has so far supported eight animated shorts. Taynikma Legends by Jan Kjær, Dog in Heaven by Jeannette Nørgaard, Piggy by Rickard Söderström, The Secret of the Ice Flower by Jacob Ley have all premiered, while Woolfert by Søren Thomas, The Flame and the Cottonball by Niels Bisbo, The Children’s World by Paw Charlie Ravn and Skyggedyret by Dorte Bengtson will open this spring.