An invitation by Olafur Eliasson inspired Colombian director Oscar Ruiz Navia to turn a casting session into a personal and poetic investigation of fiction and non-fiction. Solecito is one of 16 films inspired by the Icelandic-Danish artist's solar-powered lamp Little Sun.

Director Oscar Ruiz Navia met the protagonists of Solecito, Camila Llanos Correa and Maicol Stiven Quiñones González during a casting session at their local high school. The director was casting actors for his upcoming feature Los Hongos, but reality and a personal invitation by Olafur Eliasson took the process in a different direction.

Born in the space between fiction and non-fiction the real life of two teenagers and the process of being cast for a work of fiction, a soulful little film appeared.

The young couple told Navia their story of love, loss and longing, and the director rewarded them for their honesty by inviting them in this vulnerable state on a journey into unexpected territory. What if fiction would allow them to get back together?

It was a turbulent time in my life and the only thing I could go on with, was to dive into this humble project, which I thought was so full of light. Solecito is the result of a very personal investigation with these two teenagers.Oscar Ruiz Navia

The material was edited to a four minute short film by Jacob Thuesen with Eliasson and Fischer. The idea inspired Oscar Ruiz Navia to develop the film into a 20 minute version which Directors’ Fortnight has invited to Cannes.

Watch the trailer at films.littlesun.com 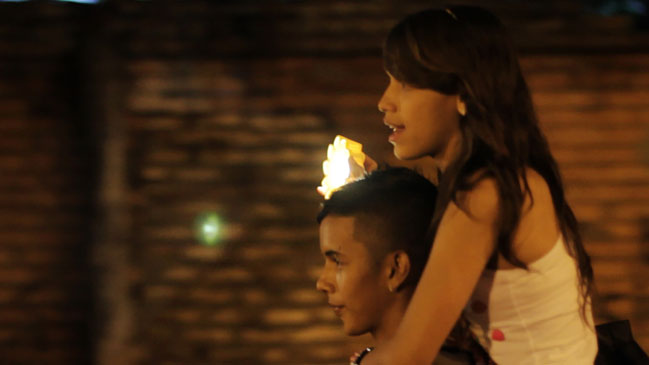 Set in a Colombian suburb, Solecito weaves together a story of love, light, and energy as it follows a young couple through a unique space existing between fiction and non-fiction.

Solecito by the Colombian director Oscar Ruiz Navia is one of 16 short films made in response to an invitation from the Danish-Icelandic artist Olafur Eliasson and the Danish producer Tine Fischer to create a film about light, life, energy, and Eliasson’s Little Sun solarpowered lamp.

Born 1982, Colombia. Graduated in Social Communications from Universidad del Valle. In 2006, he founded the production company Contravia Films. His debut as a director, writer and producer Crab Trap won the International Critics Prize Fipresci at Berlin in 2010.

Every time someone buys a Little Sun lamp in areas of the world with electricity a lamp becomes available at a much lower price in off-grid communities.