Someone You Love is a story about world famous singer-songwriter Thomas Jacob who lives in Los Angeles. He is a successful man with a lot of burned bridges. After years abroad Thomas travels back to Denmark to record a new album. There his estranged daughter Julie suddenly turns up with his 11-year-old grandson, Noa. Soon, Thomas is forced to take care of the boy. Against all odds the two of them slowly begin to connect through music. But disaster strikes, forcing Thomas to realize he has to make a choice that will change his life forever.

Someone You Love is Pernille Fischer Christensen’s fourth feature film and marks her third time at the Berlinale. The film reunites actors Mikael Persbrandt and Trine Dyrholm in the leads for the first time since Susanne Bier’s Oscar winner In a Better World.

Someone You Love is produced by Sisse Graum Jørgensen and Vinca Wiedemann for Zentropa.

Someone You Love stills: Rolf Konow

“Thomas Jacob is a big mishmash of everything I think is exciting and cool. We talked about Leonard Cohen a lot, the soulfulness and spirituality of his lyrics. And Nick Cave, too, for sure. His ballads are some of the finest songs I know. I have listened, and cried, to them a lot. They always have a strong melody, beauty, but also something devilish about them. That’s what I’m always looking for in my characters, the clash between beauty and cruelty.”

“I was looking for an actor who has a lot of masculine power but also something delicate and sensitive about him. That’s the paradox of Mikael Persbrandt’s character.”

My Films Grow Out of My Characters

Since winning a Silver Bear in 2006 for her first feature A Soap, Pernille Fischer Christensen has kept refining the intimate interpersonal story. So too in her new film, Someone You Love, which uses soulful rock to portray a successful musician whose notions of freedom and love are rattled to the core.

In fact, her inclination to make intimate stories goes back to before her feature debut A Soap. Ever since her first short film, Habibti My Love, from 2002, Pernille Fischer Christensen has been the uncrowned queen of emotional dramas exploring interpersonal relationships, generally between just two people, in intimate, intense stories. But she never planned to become that kind of director.

“When I started film school I had never worked with actors before. I wasn’t particularly interested in acting, either. Where I was coming from was more visual and I was more into cinematic experimentation. So, in the beginning I wasn’t very good at directing actors and I was pretty nervous about the whole thing, too.”

A lot of my films grow out of the characters and my wish to work with a certain actor.Pernille Fischer Christensen

That quickly, and completely, changed. A Soap from 2006 centres on the relationship between a recently singled young woman and her transsexual downstairs neighbour. Over the film’s 104 minutes, the director’s camera barely strays from the two actors, Trine Dyrholm and David Dencik, or the tiny Copenhagen apartments where the film was shot. Her intimate depiction was rewarded with both the Silver Bear and Best Debut Film in Berlin that year.

“It might have something to do with my interest in people in miniature. The ‘big things’ in life happen between you and me – letdown, despair, love,” the director muses.

Stepping outside the four walls of small flats, her 2008 film Dancers looked at two people dancing around each other in a story of a dance studio owner who falls in love with an ex-con electrician. This time, Dyrholm played opposite Anders W. Berthelsen. In A Family from 2010, the drama unfolds as a small family watches their father get sick and die of cancer.

In Someone You Love, Fischer Christensen is back with a new intimate drama co-written with her writing and romantic partner, Kim Fupz Aakeson. The story is about a world-famous rock musician, played by Mikael Persbrandt, who returns from the US and grudgingly has to take care of his grown daughter and her young son. Dyrholm is back, too, playing the musician’s Danish producer. While the two-room flats have given way to a castle and the ordinary Danish characters have been joined by a star, Someone You Love is still a classic Fischer Christensen film – an intimate story between a small handful of people.

Q: Where did you get the idea for a film about a rock star who returns home?

“A lot of my films grow out of the characters and my wish to work with a certain actor. This time, my love fell on Mikael Persbrandt.”

Q: He has freed himself, but he isn’t free. He’s like a child who can’t do anything himself …

“True. His idea of freedom has become a prison and a bankruptcy of the soul. He thinks he’s steering his life in one direction, but he’s actually moving in a completely different direction.”

Q: Is there an exploration of parenthood in this, too? The character does everything a parent shouldn’t do.

“He’s certainly not very loving, even to himself. In terms of parenthood, the film is about what I call cleaning house.’ As parents, we are all responsible for cleaning up our ‘shit’ and making sure we don’t pass it on to the next generation. This is one of the things the character comes to realise. He thinks his freedom is about letting go of responsibility, when in fact there’s just as much freedom in taking responsibility for your life and your actions, and not play the victim. He’s still stuck in how he talks about his own father and his face-off with him.”

Q: Why did you cast Mikael Persbrandt as Thomas Jacob the rock star?

“With Mikael, I knew I didn’t have to do a lot of research. It’s no secret that Mikael has had a wild life. He brought a lot to the table. His fierceness in the film isn’t something he has to search for very long. Plus, I was looking for an actor who has a lot of masculine power but also something delicate and sensitive about him. That’s the paradox or contrast of Mikael’s character. On one hand, he’s callous and standoffish. On the other hand, he makes the most delicate poetry about love in his songs.”

“Mikael is a wild man, probably the wildest person I ever met. Anything you say about him – including as an actor – the opposite is also true. It’s a bit like his character in the film. Mikael is really hard-core. One day he shows up looking like a biker, the next day he’s all adorable looking, like a ballet dancer. If you suggest something to him, you never know if he’s going to go ‘I love you’ or just give you a look that says, ‘That’s the most ridiculous thing I ever heard.’ It keeps you on your toes, being around him. You can’t take anything for granted. He’s always challenging you. When we started shooting the scenes, he never went for the obvious or facile.”

Q: Who was the model for Thomas Jacob?

“He is a big mishmash of everything I think is exciting and cool, both personality wise and music wise. We talked about Leonard Cohen a lot, the soulfulness and spirituality of his lyrics. And Nick Cave, too, for sure. His ballads are some of the finest songs I know. I have listened, and cried, to them a lot. They always have a strong melody, beauty, but also something devilish about them. That’s what I’m always looking for in my characters, the clash between beauty and cruelty.”

Q: The songs and lyrics in the film are written by the Danish singer-songwriter Tina Dickow, working from your notes. Was it a conscious choice to give the songs a feminine twist?

“It’s hugely interesting to me that this character has such a feminine and sensual side to him. What happens when a man sings something that was written by a woman? Mikael and I talked about that a lot. He said things like, ‘A man would never write that he’s taking his clothes off.’ But why the hell not? That’s so awesome! How many paintings haven’t I seen of women undressing and stepping into the bath? We’re turning the tables now, I told him. Women will love to hear you sing about being present in the moment, in the now.”

Q: How did Persbrandt feel about singing?

“He’d never tried it before, so it was a huge challenge. For both of us. Fortunately, Mikael has a beautiful voice. But of course, something happens to you when you sing. It triggers something in you, which can be a pretty powerful thing, because you sing with your body. It opens up feelings. That was a big thing for him. He conquered himself by doing it.”

Someone You Love, selected for Berlinale Special (Gala screening), is produced by Sisse Graum Jørgensen and Vinca Wiedemann for Zentropa.

Someone You Love in Danish Film Catalogue 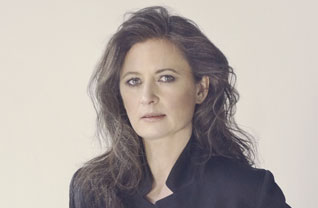 Director, born 1969. Pernille Fischer Christensen’s international breakthrough came with her debut feature A Soap which won the Jury Grand Prix and Best Debut Feature at the Berlin film festival in 2006. In 2008 came Dancers, followed by A Family in 2010, which was selected for competition at Berlin and won the FIPRESCI Prize in 2010. Someone You Love is Fischer Christensen’s fourth feature film. Her next project is a film about the Swedish writer Astrid Lindgren. Fischer Christensen is a direction graduate of the National Film School of Denmark, 1999.

Someone You Love in Danish Film Catalogue