FALL ISSUE 2015
Sparrows
The story of a damaged father-son relationship is at the centre of Rúnar Rúnarsson's second feature, yet again set in Iceland.
Toronto + San Sebastian film festivals

Sparrows is the story of Ari, 16, who has been living in the city with his mother for the last five years. When she leaves for Africa to supervise a research project, Ari is forced to move back to his small hometown in rural Iceland to live with his father Gunnar. Ari and Gunnar have lost contact over the years, and a lot has changed since Ari was there the last time. His best friend Laura has turned into a young woman and has a boyfriend. His old friends have become estranged, and since his father spends most nights drinking, the only one he can talk to is his grandmother. In these hopeless and declining surroundings, Ari has to step up and find his way.

As with Rúnar Rúnarsson’s debut feature, Volcano (2011), which was warmly received at the Cannes Festival, Sparrows explores the emotions intrinsic to life’s difficult changes. The film is produced by Mikkel Jersin for Nimbus Film and Nimbus Iceland and opens at the Toronto Film Festival (10-20 September), moving on to its European premiere at the San Sebastian Film Festival (18-26 September).

“The poetic part and the emotions tell the story – as much with sounds as with visuals. That’s something that intrigues me more than plot. It’s not like I throw the orthodox structure away, just that it comes automatically. Writing a treatment is something I hate. It kills the liquidity of my writing.”

“Everything that I do more or less is based on first, second or third hand things in my own life or lives of people that I know. I put some fictional elements to tie it all together.”

“I try to make some kind of realism but I wouldn’t say it’s social realism. I want to have more of a poetic realism.”

Reality is a Grayscale

A father and his son struggle to reconnect in Rúnar Rúnarsson’s Sparrows, set in Iceland’s hauntingly beautiful Westfjords. As in his previous films, the director takes a poetic look at real-life emotions that are never black and white.

Between making films, Icelandic writer-director Rúnar Rúnarsson likes to go fishing to clear his head. So it’s no surprise that when he talks about his creative process, it’s with a watery metaphor.

“I’m standing on one side of a river, I’m throwing rocks into this river. Different ideas or visuals that pop up. When I can see that I can jump between those rocks, that’s when I see that I can reach the other side of the river.”

For his second feature film Sparrows, those rocks built into the story of Ari, a 16-year-old boy who has to leave his home with his mother in Reykjavik to move back to his former hometown, in the beautiful but isolated Westfjords of Iceland. He finds his father is struggling with unemployment but he gets to reconnect with his grandmother and also his childhood friend Laura, who is growing up quickly.

“In my shorts and in my first feature, Volcano, I’ve been dealing with people at crossroads in their lives, as well as interactions between the generations,” says the 38-year-old Rúnarsson. “In this film, similar to Volcano, there are three generations together having some kind of interaction, and often what’s interesting is the lack of skill in those communications.”

When writing, the director concentrates on his characters, visuals and emotions – letting the plot fall into place organically. “The poetic part and the emotions tell the story – as much with sounds as with visuals. That’s something that intrigues me more than plot,” he says. “It’s not like I throw the orthodox structure away, just that it comes automatically. I don’t sit down to think of ‘when act two starts’ or ‘plot point one.’ Writing a treatment is something I hate. It kills the liquidity of my writing.”

“The Westfjords and their beautiful surroundings and worn towns is a magical and thematically poignant place to portray a story of change. It’s a place I consider my second home.”Rúnar Rúnarsson

Personal memories, people he knows and real-life experiences inform what he writes. “Everything that I do more or less is based on first, second or third hand things in my own life or lives of people that I know. I put some fictional elements to tie it all together.”

The Westfjords is a place close to his heart as Rúnarsson has been visiting friends in the area for more than 20 years. “The Westfjords and their beautiful surroundings and worn towns – that are fighting for survival, even before the financial crisis – is a magical and thematically poignant place to portray a story of change. It’s a place I consider my second home,” says Rúnarsson.

He continues, “Locations have a big impact on my writing. I knew this area very well, so it was not only in the back of my mind when I was writing. It was really important.”

Music and sound were also crucial. Because Ari is a choirboy, it was organic to have music be woven into the story. “The musical part was important from an early stage,” Rúnarsson says enthusiastically. “I had never worked with music integrated into the storytelling. It was so much fun to collaborate with Kjartan (Sveinsson, of Sigur Rós, ed.) from early stages.” A traditional score is only used three times in the film.

Sparrows is a Danish-Icelandic co-production, led by Nimbus Film producer Mikkel Jersin who was named as one of Screen International’s Future Leaders earlier this year. Rúnarsson and Jersin met while they both attended the National Film School of Denmark. “It was a fruitful time at film school. It was a privilege to be four years in this environment when you eat, breathe and live films,” says Rúnarsson, who graduated in 2009.

Also at the film school, Rúnarsson met his two key creative collaborators, DoP Sophia Olsson and editor Jacob Schulsinger. “Sophia, Jacob and I were in the same year, and we worked on a lot of projects together in school. Now we’ve made Volcano and Sparrows together.” 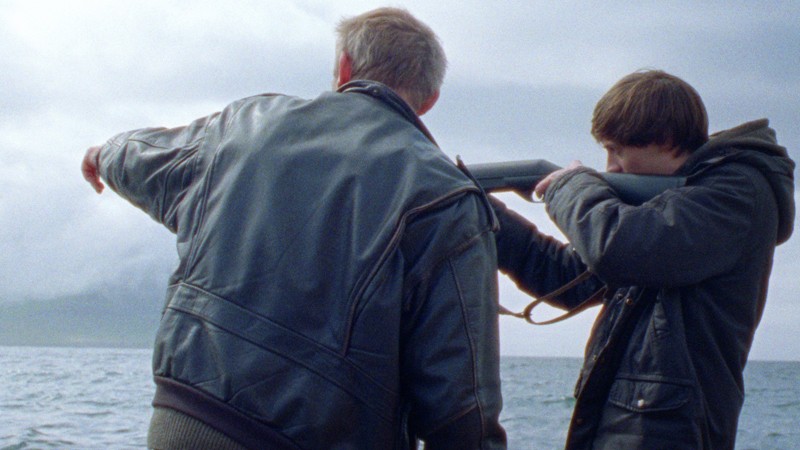 They have developed a creative shorthand to work together. “We have this way how we deal with things. We don’t talk too much about it anymore, it’s integrated into our approach,” Rúnarsson explains.

That shorthand evolves as each person gets older and has more experience – for instance, Schulsinger edited Ruben Östlund’s Force Majeure and Olsson shot Daniel Joseph Borgman’s The Weight of Elephants. “The older you get, you change as a person, and the dynamics of the group change as well. Jacob edits other films and gets more experience, Sophia is shooting with other people. They always come in with new energy as well, but it’s like we found a matching pair of shoes in school and we keep on wearing them, even if we take hikes in new places.”

Shooting in the Remote Westfjords

The whole team was well prepared ahead of the 32-day shoot for Sparrows. Rúnarsson led nine weeks of location scouting followed by meticulous storyboarding. “It’s really important to us we have a long preparation time, but that doesn’t mean that we shoot exactly what we have on the storyboards. That planning actually gives us the possibility of improvisation, to problem solve, to catch something you didn’t anticipate – like a movement from the actors, or a beautiful light coming in.”

Schulsinger was on set from the first day of shooting to work on edits as the shoot progressed. “It was great to have that oversight of the visual storytelling evolving,” Rúnarsson recalls, as he and Olsson would gather at Schulsinger’s place each night to talk about the film’s progress and how to respond during the future days of shooting.

Sparrows was shot on 16mm film, and as Rúnarsson quips, “the dailies didn’t come daily.” They were processed at a lab in Sweden, with footage going over with couriers every other day and the lab delivering materials back via the Internet. But it was worth the hassle, he says.

“I was introduced to alternatives but we knew this was the right thing for this film … The visuals and the sound are such important mediums for me to tell this story.” He adds, “I have this feeling that other films are becoming more and more plot driven and have shorter shooting schedules …”

“If things were missing, the art department would go between houses, and people would let us borrow things from their living rooms.”Rúnar Rúnarsson

Shooting in the remote Westfjords towns such as Flateyri, Isafjordur and Bolungarvik was a challenge. Even finding accommodation for cast and crew was a stretch, as the areas have become more deserted after the local fishing industry has declined over the years.

Small-town hospitality balanced some logistical challenges. “If things were missing, the art department would go between houses, and people would let us borrow things from their living rooms. The people in this area have such a warm heart, they are such generous people, they did their utmost to help us,” Rúnarsson says.

Luckily, rain wasn’t a problem during the shoot, but fog could be an issue. “The biggest challenge was if it got warm then the fjords could fill up with fog,” the director remembers. “But sometimes this fog could give us beautiful things. It gave us different dynamics. We sometimes would have to skip the plan for the day and move quickly.”

Atli Óskar Fjalarsson plays Ari, and Rúnarsson says, “he is such a natural.” The young actor had already worked with the director on his 2008 short 2Birds. “I’ve been following him ever since,” Rúnarsson says. “In Sparrows, he’s in every scene for 32 days. It’s such a marathon, even for a trained actor. He had the stamina to stay focused. He had a presence.”

It’s not all about Ari, of course. Ingvar Sigurðsson, best known for his role in Jar City, plays his father, who is trapped in unemployment and alcohol abuse. “He’s a really good actor, and an intelligent man,” Rúnarsson says of Sigurðsson. “He became such an anchor throughout the whole film. It’s a difficult role to take on to sense the fragile soul behind this hardness. He really did such a good performance.”

“I don’t do happy endings or sad endings. I like the grayscale.”Rúnar Rúnarsson

As with Volcano – which was about a man coming to terms with the last years of his life – Sparrows takes a poetic look at real-life emotions. It was important for Rúnarsson that Sparrows‘ ending is not tied up in an easy bow. “I don’t do happy endings or sad endings. I like the grayscale, I try to make some kind of realism but I wouldn’t say it’s social realism. I want to have more of a poetic realism,” he says. “You should take the characters not as black and white. Reality is a grayscale.”

Rúnarsson says he is feeling “quite creative at the moment” writing several potential projects – in between clearing his head fishing. Returning to his aquatic metaphor, he says, “I haven’t seen over the river yet but there are different paths that are piling up.”

Sparrows, premiering at the film festivals in Toronto and San Sebastian in September, is produced by Mikkel Jersin for Nimbus Film and Nimbus Iceland.

Director. Born 1977 in Reykjavik, Iceland. Graduated from the National Film School of Denmark in 2009.
Rúnarsson’s short film The Last Farm (2004) received an Oscar nomination, while his two student films, 2Birds (2008) and Anna (2009), received multiple awards and were selected for the Cannes Festival.
Rúnarsson made his feature debut with Volcano (2011), selected for Cannes Directors’ Fortnight and winner of numerous international awards.
Rúnarsson’s second feature, Sparrows, world premieres at the Toronto Film Festival in the Contemporary World Cinema section and makes its European premiere in competition at San Sebastian.