In summer 2011, the polar schooner Activ sat sail for one of the most majestic and inhospitable places on the planet. Aboard was a group of adventurous scientists, artists ... and filmmakers.

Our expedition was an expedition in reverse. It began with an opportunity. The opportunity to go take the amazing wooden sailing ship Activ somewhere. The owner made the ship available free of charge, a generous foundation provided the funding, and the captain was full of wanderlust. So, the captain, Jonas Bergsøe, the artist Per Kirkeby and I decided not to waste this rare opportunity on grand strategies and well-rounded plans. On the contrary, we would give a number of scientists and artists a chance to visit wonderful, rich-in-opportunities Northeast Greenland in summer 2011 and let everybody make the most of whatever the trip happened to offer.

Art and science both express the human need to understand ourselves in our world. Fine social constructions would probably result from merging the two. However, we thought a trip with no expectations of synergies and intersections was what we needed and what would produce the most valuable results, if we simply populated the ship with amiable people who were all experts in their field. And so the expedition was manned.

Ella Island and the large complex of fjords that surrounds it became the expedition’s goal. The deep fjords of Northeast Greenland are unrivalled in the category of amazing. Geological deposits are found there from ancient climate disasters that led to the entire Earth freezing over 750 million years ago. Geological layers are found there from the age when the first animals appeared, after microbes had had the run of the place for three billion years. In vast areas, biology and archaeology are only infrequent visitors. All these scientific goals are generously strewn across a perfect, blindingly beautiful and dramatic landscape.

The film, Expedition to the End of World, is a snapshot, not a document of the participating artists and scientists or their projects. A snapshot representing the filmmakers’ use of this unusual opportunity. No obligations or performance contracts, just pure exploration of the worlds of nature, science and art.

Minik Rosing is a Professor at the Natural History Museum of Denmark and initiator of the Expedition. Release February 6. 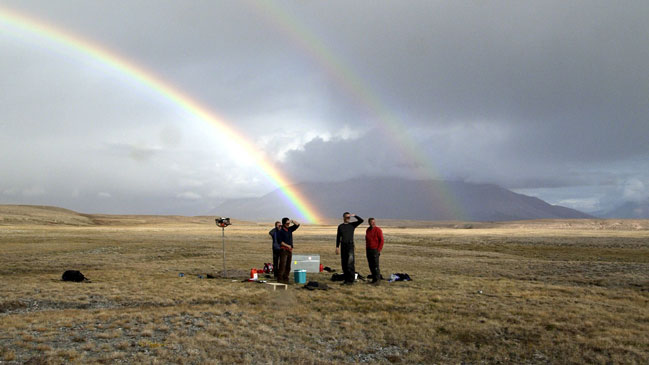 Expedition to the End of World Photo: Haslund Film

Expedition to the End of the World
Producer Michael Haslund-Christensen was invited aboard the good ship Activ bound for the vast fjord system in Northeast Greenland to make a film about the Expedition. Originally the project was supposed to have three directors – Janus Metz, Haslund-Christensen and Daniel Dencik, but it was then redefined to be a feature with Dencik as director, Metz as executive producer and Haslund-Christensen as producer.

Daniel Dencik, 40, is director, editor, scriptwriter and poet. His editing works include Michael Madsen’s Into Eternity (2010), Dagur Kari’s Nói Albínói (2001) and Jesper Jargil’s The Humiliated (1998). Moon Rider from 2012 is Dencik’s debut as a documentary film director.