By Demetrios Matheou Of Media and Men / IDFA

At a time when the newspaper industry is struggling with changing habits of news consumption, Mikala Krogh got access to the Danish tabloid Ekstra Bladet. Documenting the daily work of reporters and editors, The Newsroom – Off the Record also suggests that the decline in tabloid readership is about more than competition from new media, says  film critic and former newspaper reporter Demetrios Matheou. Read interview with the director below.

This November two “newsrooms” are presented on  screen, with two very different perspectives on today’s  journalistic profession. One is a fiction, the other a documentary; one clings to a nostalgic notion that traditional news media still matter, the other signals their death knell.

On HBO, the third season of The Newsroom is underway. Written by Aaron Sorkin, with that writer’s customary mixture of idealism and hyperbole, the show follows a Cable television news team, led by its crusading anchorman. For those of us who still believe in the role of trained and conscientious journalists in reporting the news, Sorkin’s romanticized newsroom feels like a guilty pleasure.

But for a more realistic idea of the state of play for today’s media, in particular newspapers, audiences should look to Mikala Krogh’s documentary The Newsroom – Off the Record.

Krogh’s film offers a fly-on-the-wall of the Danish tabloid Ekstra Bladet, as chief editor Poul Madsen tries to save a paper whose circulation is plummeting – from 130,000 in 2000, to 60,000 in 2012 and still falling – with a corresponding drop in advertising revenue.

At the same time as addressing the newspaper, Poul Madsen seeks to make its more popular website generate revenue – to persuade online users to pay for something that they’re already enjoying for free.

Ekstra Bladet’s problems reflect the crisis faced by the newspaper industry everywhere in the world, with the exception of Asia, as editors combat both the budgetary effects of the economic slump and the growing competition from new media.

The industry is experiencing declining sales on a catastrophic scale. July figures suggested that the UK newspaper market was falling at a rate of 8% a year; in the past decade, the country’s Sunday newspapers have lost half of their sales – six million copies. In the same period, the total circulation of Danish newspapers has declined by more than 29%, some 470,000. In the United States, newspapers have actually been closing for years; since 2001, one fifth of American journalists have lost their jobs.

Media executives have been immersed in the details of adapting to the new environment – pay walls remain a hit-and-miss phenomenon – without particularly understanding the ethos they are up against.

Krogh reveals the crisis at the coalface. Nothing Poul Madsen does makes any difference to his paper’s circulation or finances, whether he’s cutting pages, making redundancies, breaking good news stories or pursuing stories that other papers won’t touch. At one point he ruefully reports his own teenage son’s insistence that he can’t wait for dad to print the news, when it is updated constantly online. And the further Madsen moves into the online world – at one point he travels to the US to get tips from the management of the Huffington Post – the more disillusioned his journalists become, as they see their role becoming marginalized.

“One of the paradoxes of tabloid newspapers is that their staff are amongst the most practically gifted and dogged in the business.”Demetrios Matheou

The Ethos of the Tabloid Newspaper

Andrew Rossi’s 2011 documentary Page One considered the same challenges and questions at The New York Times. But there are key differences between the two newspapers, the chief one, perhaps, being that of reputation.

The New York Times has won dozens of Pulitzer Prizes and is regarded as a national “newspaper of record”. It’s had its crises of content, including a reporter found to be plagiarising and fabricating stories, and controversy over its coverage of the WMD programme. Yet it remains a potent news organisation, both off and online. In contrast, Ekstra Bladet’s Citizen Kane-like claim to be “a defender of the ordinary man” is undermined by its often sensationalist and salacious content; one of its senior staff laments the perception that “it’s all death and boobs with us”. Early subscribers to its paid-for pages admit to doing so for the porn.

It can’t be a coincidence that Krogh’s film spends so much time with Poul’s failed attempt at “crusading” journalism. The high-profile campaign for stronger efforts to free the hijacked Danish seamen is met with widespread criticism – the paper is accused of actually prolonging the crisis in a bid to sell papers – and censure by the Press Complaints Commission.

Although Krogh scrupulously avoids commentary,  it’s impossible not to feel sympathy with Madsen and his team at this point. One of the paradoxes of tabloid newspapers is that their staff are amongst the most practically gifted and dogged in the business; the problem is the ethos in which they work. So here we see a talented young trainee’s excitement at her first front page story ruined by the cynicism of her sub-editors, whose headline distorts the facts for effect, and the heroically hard-working investigative journalists on the hostage story doubted because of their paper’s notoriety.

Has the Public Had Enough?

While old-school journalists rightly highlight the absence of training or regulation of their online counterparts, the shenanigans of the tabloid press in recent years make that argument redundant. The best example is the phone-hacking scandal in the UK that led to the closure of The News of the World and jailing of its former editor; it’s interesting that the UK newspapers losing the most readers are the tabloids.

New media and social media have heralded a fundamental change in the way that people think of “information” – its creation, access and dissemination; there is now a democratization of news that flies in the face of its traditional delivery.

There are signs, in papers like The New York Times and The Guardian, that the quality press can face the challenges posed by the internet and successfully adapt; the same might be said for television news organizations. But The Newsroom  – Off the Record suggests the gloomy possibility that the internet is not the chief reason for the struggles of the tabloids – that, in fact, the public has simply had enough of them.

And if that’s the case, perhaps the only place for their content is, ironically, online. 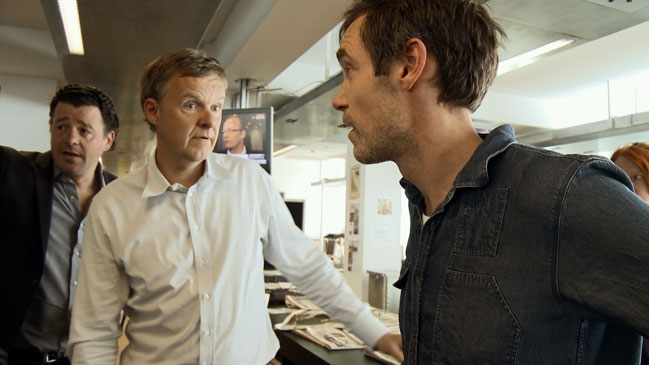 “Insight into the Journalistic Process Is Important to Understand Our Democracy”

INTERVIEW. As the daughter of a journalist and editor-in-chief, Mikala Krogh’s childhood was defined by newspapers, debate and a critical attitude towards those in power. To make The Newsroom – Off the Record, the filmmaker spent the entire year of 2013 as a fly on the wall at the Copenhagen tabloid Ekstra Bladet.

As told to Lasse Jensen

My father was editor-in-chief of a socialist paper called Socialistisk Dagblad, which was in danger of closing, and he put up the family’s row house as collateral to save the paper. The prospect of having to move was a pretty big deal. But it says something about how important print newspapers were in our family. We didn’t lose the house, but the paper closed – and I remember that as painful.

I absorbed journalism with my mother’s milk  and always wanted to do a film about a newsroom. No one ever really has, in a way that gives you insight into the journalistic process. And that’s important – to understand our democracy and  to understand the role of journalism. We have seen portraits of politicians and coverage of all sorts of other aspects of our society. Journalists are way down  on the credibility scale, and I think people until now have had a grossly wrong image of journalism.

There were two papers I thought it would be interesting to make a film about. One was Information, which I knew (Krogh’s father was editor-in-chief, ed.), and the other was Ekstra Bladet, because it’s so controversial and because I love to hate it. On one hand, I think Ekstra Bladet has the most amazing scoops and I love that politicians are afraid of ending up on the front page of the paper. On the other hand, some of their front pages just make me wonder what the hell they’re doing. ‘What was the editorial process that led to this, and is anyone using their brains?’

I always try to stick to investigating and not bring in any preconceptions I’m looking to confirm. Perhaps that’s where documentaries and journalism diverge. I often find that the work of journalists is about wanting to confirm a thesis, and that’s not how I work at all. I investigate and when I sit down to edit, I pick certain threads.

I think it’s more interesting simply to observe and report. That’s my method. If I only just ask  questions, they (editors and journalists, ed.) are really  good at talking their way out of it and feeding you a line – that’s part of the reason why so many media programmes and newsmagazines look the same.

Editor-in-chief Poul Madsen is putting his ass on the line with this film. He showed me enormous confidence by opening his doors to me.

He has a pretty unique job, because he’s both the editorial leader and a businessman. That’s a pretty unique combination, having to both set the daily editorial line and turn the sinking ship around. The way I see it, he’s a highly likeable person in a mega-cynical position.

This is an abridged version of an interview first published in the newspaper Information on 26 September 2014.

The Newsroom – Off the Record, selected for Of Media and Men at IDFA 2014, is produced by Sigrid Dyekjær for Danish Documentary Production. 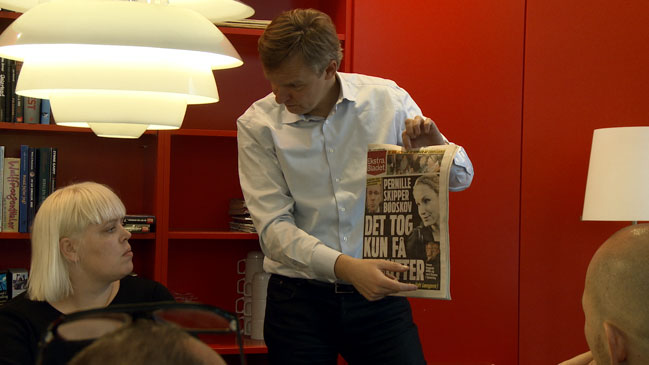 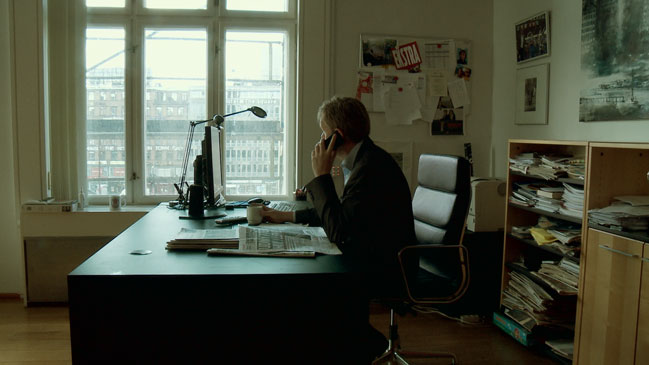 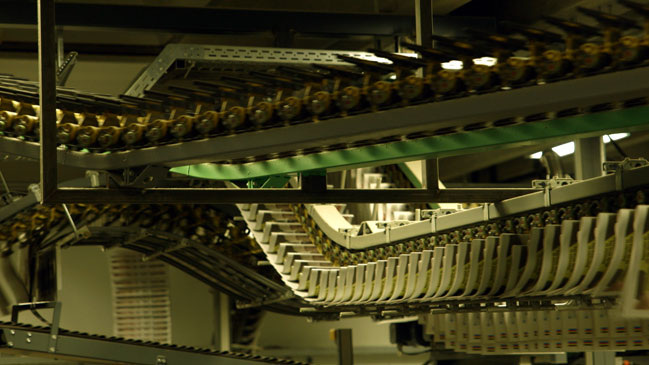 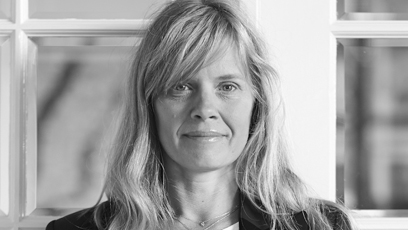 Director Mikala Krogh, born 1973, graduated in documentary direction from the National Film School of Denmark in 2001. Krogh worked for several years in radio before turning to filmmaking in 1992. She won CPH:DOX’s Audience Award for A Normal Life (2012), about a family with a daughter who has cancer, also selected for IDFA. Other films include Cairo Garbage (2009), Beth’s Diary (with Kent Klich, 2006), My Grandad’s Murderer (with Søren Fauli, 2004) and My Father’s Choice (2002). The Newsroom – Off the Record (2014) is selected for Of Media and Men at IDFA.