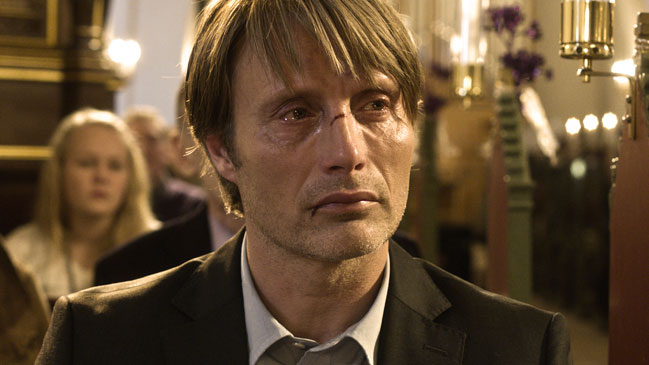 Biopics and period dramas are trending, as the gender debate rages onscreen and in the film industry. Folk comedies are alive and kicking, Jussi Adler crime films are packing cinemas, while the

Many Faces of Mads

04. may 2016 | PROFILE. Mads Mikkelsen is used to being judged for his performances. However, as a member of the Jury at the Cannes Film Festival, he's the one doing the judging for once. This new role provides the perfect

25. nov 2015 | ACTOR PROFILE. Anders Thomas Jensen's new film "Men & Chicken," which screened at the Toronto Film Festival and a host of other festivals this fall, provides the perfect cue to assess the many faces of Mads

Every Picture Has to Tell the Story

28. feb 2014 | THE OSCARS. Cinematographer Charlotte Bruus Christensen has teamed up with Thomas Vinterberg on his last three films, including the Oscar-nominated "The Hunt." Here she talks about converting words into images

The Hunt on Oscar shortlist

20. dec 2013 | OSCARS 2014. Thomas Vinterberg's "The Hunt" is one of nine films to enter the race for an Oscar nomination. The five finalist to contend for a Foreign Language Oscar will be announced on 16 January.

Golden Globe nomination to The Hunt

31. oct 2013 | AWARD. "Vinterberg's film explores how the individual can be persecuted even in a well-meaning and well-functioning society". Danish Oscar candidate "The Hunt" wins the prestigious accolade of best Nordic

The Hunt is Danish Oscar entry

The Hunt to compete for Nordic award

03. sep 2013 | NOMINATION. Thomas Vinterberg's "The Hunt" is one of five films nominated for the Nordic Council Film Prize 2013. The winner will be announced on 30 October.

15. aug 2013 | OSCAR 2014. "The Hunt", "The Act of Killing" and "Northwest" are shortlisted for the title as Denmark's Foreign Language film. The final candidate is expected to be announced on 26 September.

Indie picks for the summer

05. jul 2013 | US RELEASES. Judging by the latest UK ratings, Joshua Oppenheimer's "The Act of Killing" still leaves no critic unaffected. To be released in the US on 19 July, the film is one of four Danish-produced titles on

28. jun 2013 | FUNDING. Last year, four European films were so financially successful that they were able to reimburse their support from the Council of Europe's funding programme Eurimages. All of the four films were

02. dec 2012 | EUROPEAN FILM AWARDS. Tobias Lindholm and Thomas Vinterberg won the award for European Screenwriter for "The Hunt" at the 2012 European Film Awards on Saturday in Malta.