FALL ISSUE 2015
The Human Journey into Outer and Inner Space

There are no little green men but lots of masterminds and mind-boggling questions in Michael Madsen's The Visit, which documents an alien invasion that hasn't taken place – yet.

It almost sounds like the antithesis of a documentary  when The Visit declares, “This film documents an event that has never taken place.” How can you even make a documentary about something that never happened?

You can, if you happen to be director Michael Madsen and make films that raise questions about humankind and aren’t held back by petty concerns – questions probing humanity’s future and digging deep into our species’ self-understanding and possibilities for survival. “Making a film about an event that hasn’t happened is a conceptual device, a way of creating a scenario,” director Michael Madsen says. “The Visit is  a future scenario, an experimental setup, the way it’s  done in science. What can you investigate and how?”

“I have an issue with reality. I’m interested in what reality really is. And so, I’m interested in possible realities,” Madsen explains. “As Robert Musil writes in ‘The Man without Qualities,’ the space  of possibilities is as relevant as the real.” To use terms from the scientific method, a normal documentary is an empirical collection of data organised into a more or less viable thesis about the nature of reality. Madsen’s documentary The Visit, for its part, is more reminiscent of the experimental setup itself.

“Looking at reality with other eyes is what I’m interested in, and it’s what interests me about documentaries. Documentaries have the great quality of being rooted in reality. But that’s also the problem with a lot of them,” he says. “Their relationship to reality basically is that they  know better. Documentaries don’t go far enough or deep enough,” Madsen says. He’s hardly impressed with documentary filmmakers who have a preconceived, ironclad idea about what the meaning of reality is or should be. The activist trend in documentaries is not Madsen’s cup of tea. 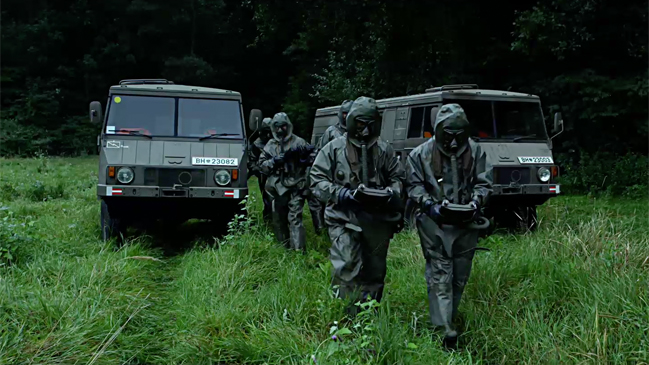 The Triffids or E.T.?

Michael Madsen dug very deep, figuratively, in his breakthrough film, the internationally acclaimed Into Eternity, which looked at the practical and philosophical consequences of storing nuclear waste.  How do you even relate to the concept of depositing waste that will be toxic to future generations for the next 100,000 years, when you yourself only live 70-80 years? How can you take responsibility for an act like that, and what moral questions does it raise when you do?

In The Visit, Madsen turns his eye to the sky, and to space, to explore another possible reality awaiting us out there. In practical terms, The Visit asks, what will happen if one day we are visited by aliens from outer space? What mechanisms will be triggered? What scenarios can we envision? What questions will we ask the aliens – and what will those questions say about us?
So, The Visit is a film that documents an event that has never taken place – even if it doesn’t feel that way considering the glut of films, books and  rural legends about more or less spectacular and hostile aliens. Will it be the Triffids coming, or  Spielberg’s cuddly E.T.? And will Sir David Attenborough be there to greet them in short  pants, with his hand outstretched? 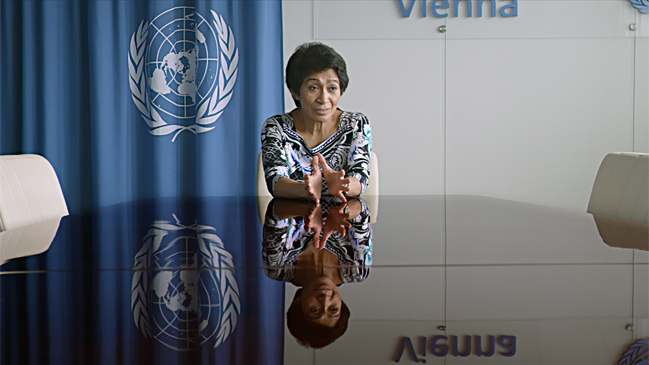 The Space between Your Ears

According to the experts, Michael Madsen says, there  are three basic scenarios for how an alien visit would  manifest itself: 1. An emergency landing. 2. An expedition. 3. An invasion. But that’s actually not what interests the filmmaker most. The aliens that truly obsess him are us, and the space he explores is the space between our ears.
While the actual waste repository of Into Eternity irrefutably made it a documentary, The Visit is necessarily more speculative. Madsen’s interview subjects may include space theologian Jacques Arnould, military advisor Paul Beaver, director of Interstellar Message Composition Doug Vakoch and the staff at the UN Office for Outer Space Affairs in Vienna, but they are still making statements about a fictional situation.

Instead of dramatisations, Madsen uses the camera’s investigative eye to create the sensation of an alien gaze on our daily life. “I want you to realise along the way that it’s not about aliens. It’s about us. The questions that are discussed are real, whether aliens are present or not,” Madsen says. Naturally, those questions orbit the film’s central what-if scenario. What if intelligent beings visited us one day? What would happen and what would it mean?

“If it did happen, I think it would be the single greatest event in human history. It would be the completion of the Copernican revolution. We would no longer be the centre of the universe. Everything would be called into question. Something concretely unknown would come into our understanding of the world, a dead angle from which anything could emerge. This state of uncertainty would force us to ask ourselves some very fundamental questions,” Madsen suggests.

The Expert as Stand-In

“For me, the audience are the key actors in my films. I very much want the audience to enter the scenario I set up,” the director says, with an ambition to make the viewer the object of investigation.

“The experts in a sense are just stand-ins for humanity. It’s not about them, but they appear in the film and gamely play along. They have had to pursue the concept to the absolute limit in terms of envisioning the truly alien. What’s the limit to what you can imagine?”

The director thinks many of the participating experts actually found the game very liberating. They could pretend that the encounter with another civilisation wasn’t a theoretical situation but a real challenge requiring all of their knowledge.

It wasn’t easy, he admits, to get these serious professionals on board. What kind of a weird UFO film is this? It wasn’t until one of the UN staff in Vienna realised that Madsen was the man behind Into Eternity that the Office agreed to participate, and the astrobiologist and the others loosened up and joined in Madsen’s thought-provoking game. “Some of them are people who will be contacted if a landing happens. Several of them volunteered for it, fully aware of the risks and uncertainties involved.

“I think several of them are convinced that there must be other civilisations in the universe, that anything else is all but impossible.” 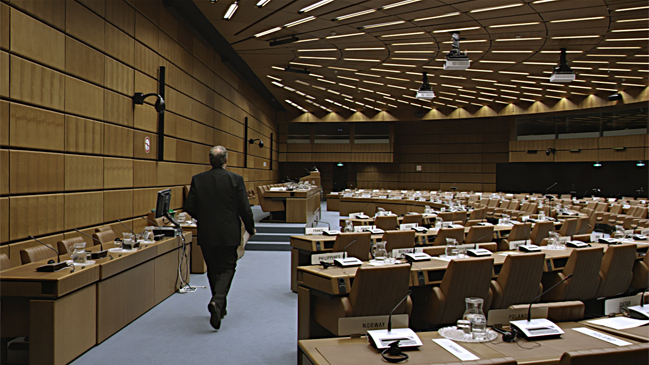 A Third Film Even More ‘Out There’

Coming after Into Eternity, The Visit is the second film in what will be Michael Madsen’s trilogy about humanity on its journey to new horizons. Madsen’s third film, Odyssey, now in pre-production, will be even more “out there.” The final instalment of his trilogy, Odyssey will look at the practical and philosophical concerns that arise the moment a decision is made to undertake a journey to another solar system, a journey of many light years.

“Odyssey is a personality test I developed with an American space psychologist and a German spaceship designer. It is an imaginary journey to the stars. A generation starship. To get to another world – without going into hypersleep as in Interstellar, which is indeed science fiction – you would have to reproduce and make a society function for maybe 10,000 years before you reach your goal,” he says.

“In the film, we’ll try to understand what such an expedition would actually involve. You wouldn’t get to die of old age, your bodily fluids would be recycled, etc. It would be a radical counterimage to the concept of personal liberty that’s such a dominant theme of our time. It would be a lot more like a hunter-gatherer society, where everything is used and recycled.”
“Into Eternity tried to make us comprehend, in human terms, that nuclear waste stays toxic for 100,000 years. It’s a crucial watershed in human history that we have the capacity to do that kind  of thing now,” says Madsen.

With The Visit and Odyssey, the director’s eye is now fixed on the next possible watershed – aliens landing in our backyard or perhaps the first odyssey embarking to the stars •

The Visit world premiered at the Sundance Film Festival in January. The film is produced by Lise Lense-Møller for Magic Hour Films.

The Visit in Danish Film Catalogue 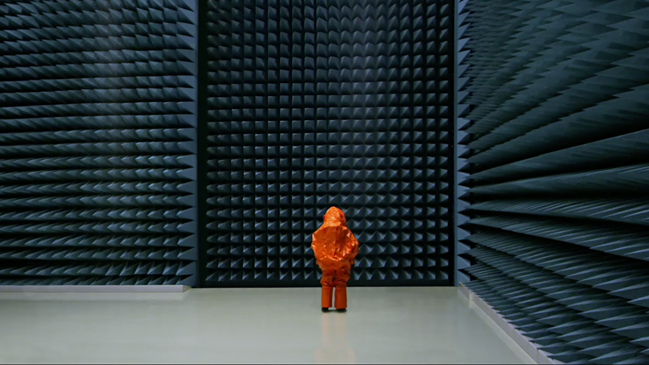 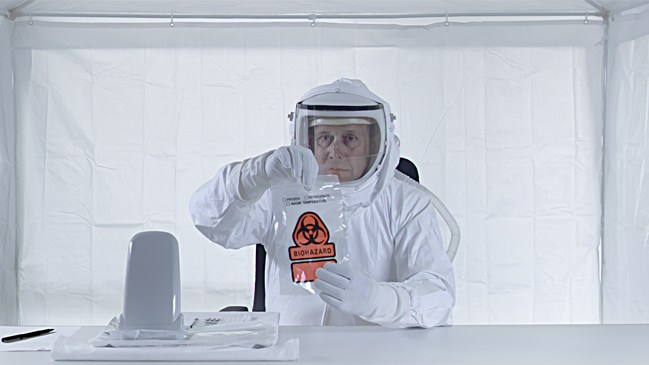 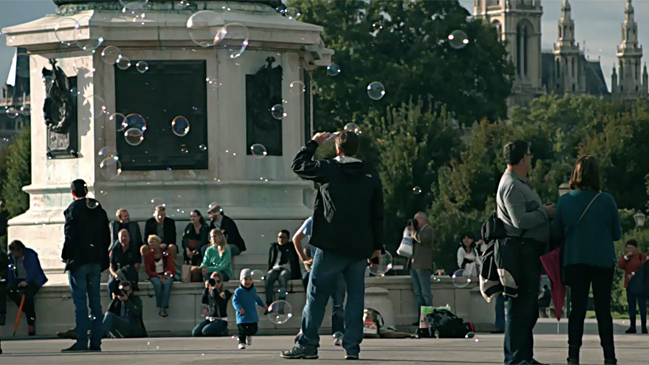 Into Eternity / “A Troubling Dream”

Michael Madsen made his name with 2010’s Into Eternity, a mesmerising meditation on the construction of the world’s first permanent nuclear-waste storage facility, designed to last 100,000 years. One reviewer called the film “more like a troubling dream, or outtakes from an abandoned David Lynch project, than a conventional documentary.” In The Visit, Madsen again uses bold imagery and an evocative score to present his vision of an alien encounter.

Director and conceptual artist, born 1971. Madsen directed the multiple award-winning Into Eternity (2010), which sent him deep underground to satisfy his curiosity about the world’s first permanent nuclear waste repository in Finland. Recent films include Halden Prison (2014), in 3D, part of Wim Wenders’ architecture series Cathedrals of Culture, which was showcased at the Berlinale. The Visit (2015) is having its world premiere at the Sundance Film Festival in the World Cinema Documentary Competition.

Producer of fiction and documentary films. Founder of Magic Hour Films. Documentary titles include Michael Madsen’s The Visit (2015) and Into Eternity (2010), Burma VJ – Reporting from a Closed Country (Anders Østergaard, 2008) and The 3 Rooms of Melancholia (as co-producer, Pirjo Honkasalo, 2005).

The Visit in Danish Film Catalogue