Jeppe Rønde is bringing out his first fiction feature, Bridgend, a story based on a real-life wave of teen suicides in Bridgend County, South Wales. Over six years, the director made frequent visits to Wales to get close to the local youth and try to answer the question on everyone's mind: Why did  they do it?

The big, unanswered question is: Why did so many young people – the official count is 79 between 2007 and 2012 – from tiny Bridgend County, South Wales, decide to end their lives?

This question is the starting point of Jeppe Rønde’s first feature fiction Bridgend. Sara moves with her father back to the former mining town they are from after her mother dies. Her father, Dave, is a policeman tasked with solving the spate of mysterious suicides among the town’s youth. Mixing life force with a death wish, the teenagers meet in the woods – away from their parents – to drink and swim in the lake and celebrate the dead. As the suicides mount, Sara’s fascination with the group grows and, against her father’s will, she falls in love with one of the boys, Jamie, a minister’s son.

“Like Sara and the other teens, most of us recognise the need for community – even if that community has an unknown dark side. You can’t control your love and your longing, especially when you’re young. But most of us don’t take our own lives for that reason. That’s where the crucial difference kicks in. Why did it end in such a tragedy?” Rønde asks.

The director provides no final answer in, just as there is no answer in real life. Some suspect the teens made a suicide pact online, where they got together in a virtual world divorced from reality. Others point to the lack of parental care. All the young suicide victims used the same method: girls and boys alike hanged themselves without leaving a suicide note.

“The modern, rational person wants to find the cause of a problem, so it can be fixed. So we can move on and put it behind us. Getting no answer when we ask ‘why’ makes us insecure. It can happen again. And it does. Young people are still committing suicide there, even if it seems to have peaked, fortunately,” Rønde says.

“The important thing for me wasn’t to provide an answer, because how do you do that? What’s the meaning of life and death? Instead, I tried to get close to the teens and understand what drives them and the group dynamics they are part of for good and ill – this incredibly powerful collective unconscious where you do certain things and follow each other without knowing exactly why.”
In the film, the divide between reason and irrationality is embodied in Sara and her father. As a cop, Dave follows the path of logic, which only leads to further bewilderment, while Sara, via her natural sensibility and immediate love, is much closer to an actual understanding.

Jeppe Rønde first came across the story of the suicides  in a newspaper article in January 2008. A few months  later, at Easter, he made the first of countless trips to Bridgend. At first, Rønde had to take an almost anthropological approach to access the lives of these teens, but today he thinks of them as friends.

“Several people have tried to make a film about the incidents, but they were all shut down or didn’t get real access. It takes a certain amount of patience,” he says. “Because I wasn’t a journalist – the local youths beat up journalists – and because I didn’t take notes, I slowly got closer to them over the years. I have been with them through good times and bad, partied with them and felt on my own body how tough this area can be.”

“Like Sara and the other teens, most of us recognise the need for community – even if that community has an unknown dark side.”Jeppe Rønde

Several young people the director was in contact with later committed suicide, even though they told  him they would never dream of doing it. One hanged  himself in a tree next to the one his best friend hanged himself in the year before. Others have tried to hang themselves more than once but survived. For a while, this happened several times a week.

Naturally, the many suicides among its young people have shaken the small community. Out of respect for the place and the youth, Rønde and his crew chose to film in the area and find local talent both in front of and behind the camera. The two leads,  Sara and Jamie, are played by professional actors Hannah Murray and Josh O’Connor, while the rest  of the actors were cast locally over a year and a half.

“These young people want their story told and put out there. Most grownups I have met want that, too, though a few, typically those whose daughters or sons have committed suicide, were more sceptical about the film. For that reason, having the support of the local community was essential to us. We showed up at community centres and other places to describe the project and took the time to talk with the authorities and the families,” Rønde says.

“I was certain we’d come up against all sorts of resistance when we shot the film, but we didn’t. On the contrary. That’s a huge relief and it pleases me no end. They could so easily have called me out for not being from around there and who was I to tell their story? But they didn’t.”

Bridgend is Jeppe Rønde’s first fiction feature. Originally a maker of documentaries, he is the director of Jerusalem, My Love and The Swenkas, which were both screened at a ton of festivals and both orbit the father-son relationship and the search for meaning.

Faith plays a significant role in Bridgend, as well. While the grownups profess a more conventional religion, in church, other forces are in play among the youth. They celebrate the dead by shouting out their names at the sky and find community with each other and in nature. Many of the characters are composites of stories that Rønde came across in Bridgend. Clearly, the film is as personal to him as his other films.

“The important thing for me wasn’t to provide an answer, because how do you do that? What’s the meaning of life and death?”Jeppe Rønde

“When I make a film, I’m always interested in examining a simple question: Why do we get up in the morning? What’s the meaning of all of this,  of life?” For the same reason, it isn’t crucial to him whether he’s working in documentaries or features.

“There’s no clear boundary between fiction and  reality. There’s no one truth. Or there are as many  truths as there are people. It’s all about sensibility and how best to tell your story. That’s where my language as a director comes in. It’s my truth. Whether  it’s called one thing or another is secondary.”

“Why do the young people in Bridgend hang themselves? I try to find answers where there are none by using a cinematic language emphasizing that there’s more to life than a linear story and a perfect pan. By mixing images of death and life, nature and modernity, time and place into montages. By showing a dog in an overgrown railway leading into the woods, as if nature had taken over civilization. By letting the silence explode into a cacophony of words and music. In short, by allowing images and sounds embrace us in an evocative, sensuous way. That way we might be able to find some kind of answer after all.”

“The Danish philosopher Søren Kierkegaard once  wrote about directing a pair of binoculars at something you either hope to see, want to see or despair at not seeing. You have to understand that the outer lenses of the binoculars are in fact mirrors. The answer lies, first and foremost, within ourselves,” the director says • 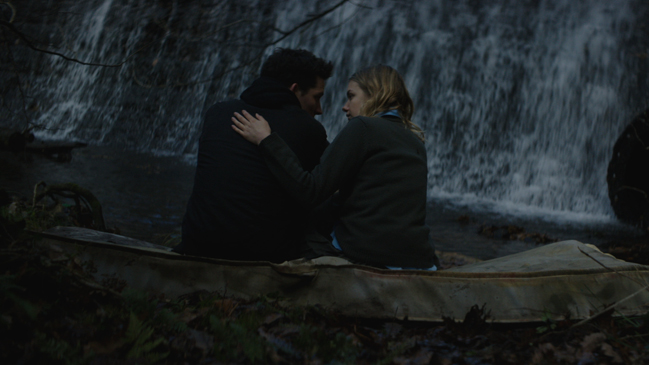 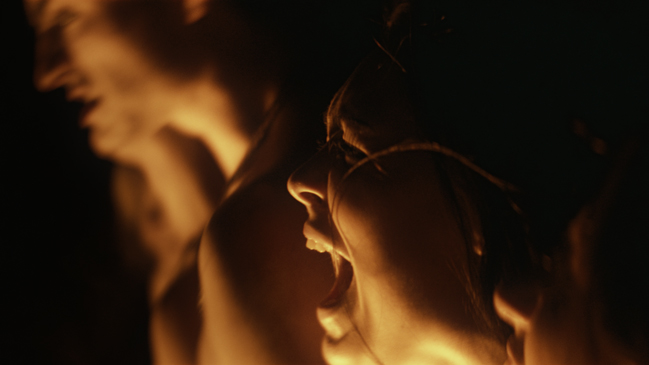 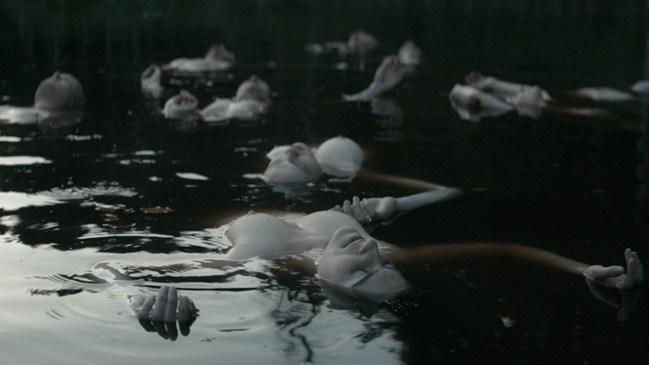 According to official sources, 79 young people committed suicide between 2007 and 2012 in Bridgend County, a South Wales community of 139,000 people. In most cases by far, they hanged themselves, leaving no suicide note.

No one has found a definitive answer why these young people killed themselves, but several theories try to explain the underlying causes. Some say the teens made a suicide pact on a social network site, where several of the deceased had profiles. Others point to the uncommonly dreary lives these young people lead and the lack of parental support in this disadvantaged, former coalmining area. Others again single out the bleak weather that enshrouds Bridgend throughout the long winter months.

Mass suicide is not a new phenomenon. History’s first mass suicide took place at the mountain fortification of Masada on the Dead Sea  in the year 73 A.D., when nearly 1,000 Jews killed themselves after  a two-year siege rather than fall into Roman hands.

Most cases of mass suicide in the last 40 years have been religiously motivated. The most widely publicised example is that of the members of the People’s Temple, led by Jim Jones, who in 1978 had ensconced themselves in Jonestown in a jungle area in Guyana, South America, waiting to depart for another, better planet. The media has called the Bridgend incidents “Jonestown with broadband,” referring to the teens’ alleged online suicide pact.

Mass suicide is not unique to humans. While Rønde was in South Wales working on his film, 26 dolphins simultaneously swam up on a beach south of Bridgend and died. This phenomenon has been observed before and marine biologists have no other explanation  for it than mass suicide.

Director, born 1973. Rønde holds a BA in Film Studies and Art History from the University of Copenhagen.

His first feature documentary, Jerusalem, My Love (2004), about the city’s uncompromising religious character and the director’s own quest for religion, debuted in IDFA’s First Appearance Competition.

The Swenkas (2005), a portrait of a small group of men in post-apartheid South Africa who dress up in flashy suits to inspire others, was nominated for IDFA’s Joris Ivens Award and won a Special Jury Prize at Toronto Hot Docs.

Bridgend (2015), Rønde’s debut fiction feature, had its world debut in the Tiger Competition at Rotterdam and the Ingmar Bergman International Debut competition at Göteborg Film Festival.